High-performance version of the C-Class Coupe gets 503bhp 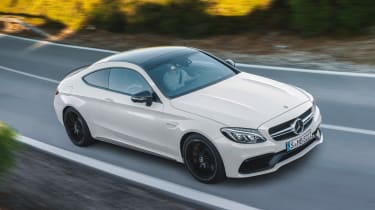 A few days after the reveal of the Mercedes C-Class Coupe, the wraps have now been removed from the AMG C 63 Coupe, the high performance version of Merc’s sleek new BMW 4 Series rival. Set to make its debut at the Frankfurt Motor Show, the car will arrive in showrooms in March next year.

Just like the C 63 saloon, the C 63 Coupe uses a 4.0-litre turbocharged V8 petrol engine that produces 469bhp and gets the car from 0-62mph in 4.0 seconds. An even more powerful version known as the C 63 ‘S’ boasts 503bhp; enough power to achieve a 0-62mph time of 3.9 seconds and a limited top speed of 155mph. These figures look particularly impressive when you compare the car to its nearest rival, the BMW M4, which is down on power at 425bhp and slower from 0-62mph at 4.3 seconds. 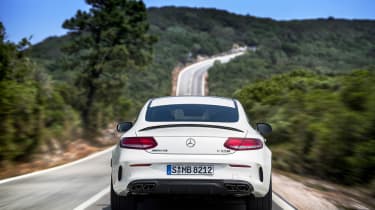 Style as well as performance is an important part of these cars’ appeal and Mercedes has given the C 63 a more aggressive look to match its staggering speed. The design includes ‘powerdomes’ in the bonnet, flared wheelarches, larger air intakes and alloy wheels, more muscular side skirts and bumpers, plus quad exhaust pipes. The C 63 also has a thin bootlid spoiler, which further enhances the racy look of the car next to the base model.

The similarities between the C 63 Coupe and the existing C 63 saloon version don’t end with the engine. The cars have essentially the same interior, so plush materials like leather and suede§, switches, and controls for the infotainment system are very familiar. The coupe also comes with the ‘Ride Control’ pack that’s fitted to the saloon – it includes various electronic systems that control elements of the suspension and power delivery for better handling. 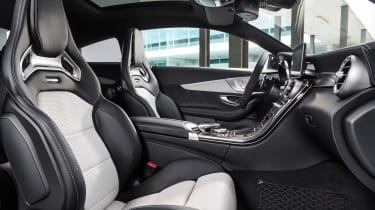 One way in which the Coupe is different to the saloon, other than two fewer doors, is a wider track (the distance between the wheels on the left and the right), which Mercedes says improves the C 63’s road-holding. The car’s wider wheelarches aren’t just for good looks – they make room for bigger tyres too, further improving acceleration and handling.

Mercedes is yet to announce prices for the AMG C 63 Coupe but we expect a starting price of around £60,000, which is very similar to the BMW M4. The extra power that comes with the C 63 S is likely to add around £10,000 to the list price.