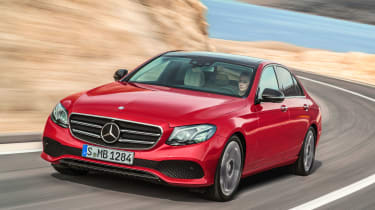 The all-new Mercedes E-Class saloon is the latest in an impressive product offensive from Mercedes. The new model, which made its public debut at the 2016 Detroit Motor Show, boasts a new look, new interior and a vast amount of new technology that, Mercedes boasts, makes the new E-Class the most advanced car in the range. Orders for the new car have opened, with prices starting at £35,935.

It follows newer versions of the smaller Mercedes C-Class compact executive car and the luxurious Mercedes S-Class both in form and function. All three of Mercedes’ core model range have very similar design themes and all aim to appeal to those wanting comfort, refinement and technology over and above a sporty driving experience. This further distances it from bitter rival BMW.

Eventually, there’ll be four versions of the new E-Class available, beginning with the saloon shown here. An estate version will follow later in 2016, while coupe and convertible models will follow in 2017, as will high-performance AMG versions. The new car is based on the same underpinnings as the S-Class, which means it’s considerably lighter than the previous model. 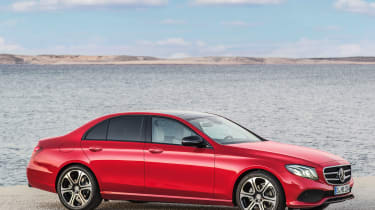 Firstly, Mercedes’ designers had to bring the styling of the E-Class into line with the rest of the Mercedes range – particularly the C-Class and S-Class – with a curvier, more fluid shape. The new car has similar lines to the C and S-Class, with sharp creases running through the handles and the bottom of the doors, as well as up the bonnet.

It’s longer by 43mm than the current car and the wheelbase (the distance between the front and rear wheels) has been increased by 65mm to allow more space inside.

Depending on the trim you choose, you get a different style of grille, although unlike other markets, UK cars won’t get the three-pointed star on the bonnet. All the cars in this country will get the large version of the badge suspended in the radiator grille itself

The car’s rear lights use LEDs, said by Mercedes to be “reminiscent of stardust, the Milky Way or the glow of a jet engine”. This ‘stardust effect’ has been created by a new LED arrangement, which makes its debut on the E-Class.

The car’s rear lights use LEDs, said by Mercedes to be “reminiscent of stardust, the Milky Way or the glow of a jet engine”. This ‘stardust effect’ has been created by a new LED arrangement, which makes its debut on the E-Class. 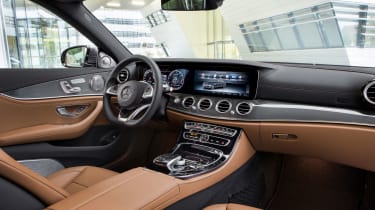 The interior design and technology represents a huge leap forward from the current car. The new E-Class’ instruments have been replaced by a large, high-resolution screen, the layout of which can be configured into Classic, Sport and Progressive layouts.

There are touch-sensitive control buttons on the steering wheel that respond to vertical and horizontal swipes, much like a smartphone. This is the first time such a system has been fitted to a steering wheel. Other control interfaces include a touchpad in the centre console that can recognise handwriting and a voice-activation system.

Materials used include ‘open-pore’ woods and leather trims, depending on specification. The seats have been ergonomically designed for comfort over long journeys and a ‘Heat Comfort’ package includes heated armrests in the doors and on the centre console.

Mercedes has used LED lights extensively throughout the interior, including 64 colours for ambient lighting. 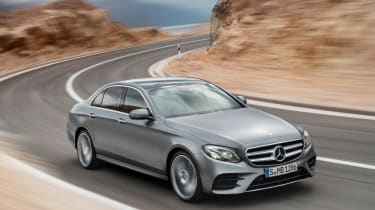 There’ll be two engines available when the new Mercedes E-Class goes on sale. The E200 has a 2.0-litre four-cylinder petrol but the engine that’ll lead the range in the UK is the E220d, a 2.0-litre diesel.

This 195bhp engine emits 102g/km of carbon dioxide and is claimed to be capable of 72.4mpg economy. Despite this, Mercedes says it can accelerate from 0-62mph in just 7.3 seconds.

An E350e hybrid model will join the range at a later date, alongside E200d, E350d and Mercedes-AMG E63 models by the end of the year. All engines will be fitted with Mercedes’ latest nine-speed automatic gearbox.

The new E-Class will have the option of Air Body Control air suspension, which allows you to cycle through three degrees of suspension stiffness for a more comfortable or sporty drive. This can vary the car’s ride height at each corner to ensure it provides improved ride quality as well as reducing fuel consumption at speed by lowering the car to improve aerodynamics. 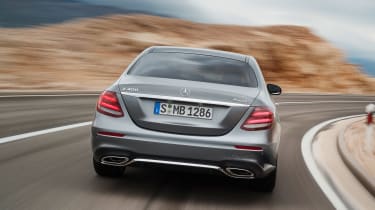 Mercedes has always been an innovator when it comes to technology and the new E-Class will be no exception thanks to an expanded range of features.

Active braking assistance is fitted as standard – this can enhance your braking in an emergency or take full control of the brakes to avoid a crash. This is supplemented by ‘Evasive Steering Assist’, which can support you if you make a sudden move to avoid an obstacle, such as a pedestrian stepping into the road. ‘Mercedes Attention Assist’ makes a return, alerting you if it detects you’re becoming drowsy.

The system can interpret surrounding vehicles and handle roads without lane markings, too. It can also adjust the car’s speed according to speed limits logged in the sat nav or by reading road signs using a camera.

Other new technology includes a remote parking app, allowing you to navigate in and out of tight parking spaces remotely and ‘Car-to-X’ communication, which lets you virtually see through corners or around obstacles by communicating with other cars or street furniture.

The new Mercedes E-Class is available to order now, with, at first, two different trim levels available; SE and AMG-Line. First deliveries of these models - with the likely big-selling 2.0-litre diesel engine - starts in May, while the V6 diesel models will arrive later in the summer. E350e hybrid versions won't arrive until later in 2016.

If you go for the E350d six-cylinder diesel (which cost from £44,930) in either trim, you also get the upgraded COMAND infotainment system, adjustable air-suspension and a 12.3-inch screen.

Step up to AMG-Line - which starts at £38,430 - and you get an AMG body kit, including side skirts and bespoke bumpers, as well as bigger, more powerful brakes. You also get an AMG steering wheel, and upgraded leather seats.

There are two main option packs to choose from - Premium and Premium Plus. The £2,795 Premium pack adds (among other things) a panoramic glass roof, keyless start and a memory system for the front seats. In addition to these items, the £3,895 Premium Plus pack adds a 13 speaker, 590-watt Burmester sound system, and an active LED light system that can control individual LEDs to provide maximum illumination without dazzling other road users.

The new E-Class is available to order now, with first cars arriving in May. Prices start at £35,935. 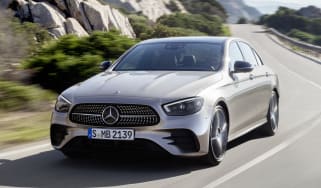