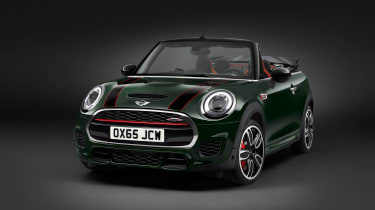 The new MINI Convertible has been revealed and is set to go on sale in March 2016, priced from £18,475, while the hot MINI John Cooper Works - the final pieces of the MINI Convertible range - will make its public debut this year's New York Motor Show. ahead of going on sale in April this year, with prices starting at £23,630.

Rather ironically given British attitudes to our native weather, the UK is the largest market in the world for the convertible version of MINI’s iconic hatchback, so the launch of a new model is a significant one in terms of the brand’s UK sales.

New developments for the 2016 MINI Convertible include a fully electric roof that MINI says is quieter and smoother than the one fitted to the previous model. It can be opened and closed at speeds of up to 18mph and takes 18 seconds to put up or down. Personalisation has proved very popular with MINI buyers, so the new Convertible is available with a roof featuring a Union Jack design based on the graphic frequently seen on the roof of the hatchback.

The boot of the new car is around 25% larger than that of the outgoing MINI Convertible, at 215 litres when the roof is closed and 160 litres with it down. Its lid opens downwards and can support luggage weighing up to 80kg to make it easier to load. The increase in space means there’s also more head and kneeroom for passengers sitting in the two rear seats. 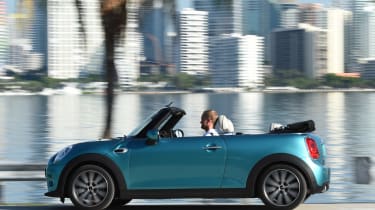 There will be three versions of the car to choose from when it launches in March; the Cooper, Cooper D and Cooper S. Just like the new MINI hatchback already on sale, the cars will be fitted with 1.5-litre petrol, 1.5-litre diesel and 2.0-litre petrol engines respectively. It's likely an entry-level MINI One version will be added at a later date, while the sporty John Cooper Works modelgoes in at the top of the range. 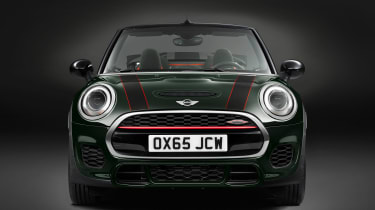 At the top of the range is the hardcore John Cooper Works model. It's powered by a 228bhp version of the Cooper S' 2.0-litre turbocharged four-cylinder petrol engine. This enables the car to do 0-62mph in 6.6 seconds (6.5 with the automatic gearbox), while the top speed tops 150mph.

Naturally, the sportiest model in the range also comes with uprated suspension and brakes to help the car deal with the extra power.

The MINI Convertible will be available with variable damper control for the first time, allowing the driver to choose between comfortable and sporty setups. 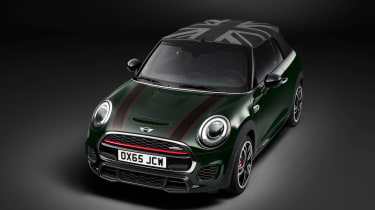 Other than the fabric roof, there isn’t much to differentiate the convertible model from the three-door hatchback. The large round headlights with chrome rings, radiator grille and black trim around the sills and wheelarches are all very familiar. The Cooper S Convertible gets the same treatment as its hatchback counterpart, with an additional bonnet vent, ‘S’ badging and model-specific rear bumper with centred chrome twin exhaust pipes.

All of the new MINI Convertible models will come with air-conditioning, Bluetooth, rear parking sensors and a reversing camera as standard. The Cooper and Cooper D will have 15-inch alloy wheels, while the Cooper S gets 16-inch versions. New exterior colours include Caribbean Aqua and Melting Silver, while there’s also new Malt Brown leather available for the interior. 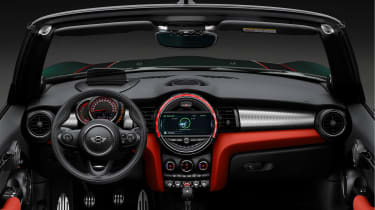 As ever with MINIs, a mind-boggling array of options will be available, including heated front seats, an upgraded stereo, sports seats, cruise control, climate control and sat nav, plus lighting and styling packs. Buyers opting for the MINI Connected XL pack will benefit from a new rain warning function, which can send a message to your smartphone if the car is parked with the roof open and bad weather is forecast.

The new MINI Convertible goes on sale in March 2016, with the John Cooper Works version following in April.