New Genesis G90 will take on premium models from the likes of Lexus, Infiniti and BMW 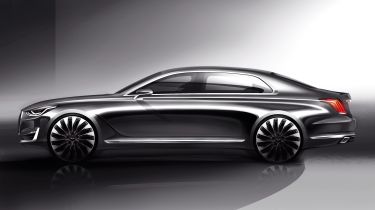 Hyundai recently revealed renderings of the first model from the high-end luxury brand. The company says the Genesis G90 "hints at the brand's design identity and future direction".

It'll go on sale in its home market of Korea, where it will be badged the EQ900. Genesis will go head-to-head with traditional executive-car players such as BMW, Mercedes and Audi – as well as Nissan’s premium brand Infiniti and Toyota’s luxury marque Lexus.

The Korean company, best known for producing affordable and reliable hatchbacks and SUVs, says the standalone Genesis range will be six models strong by 2020.

As well as Korea, Genesis cars will initially go on sale in the Chinese, North American and Middle Eastern markets. Hyundai says the brand "will expand its reach to Europe and other parts of Asia as the model range grows to full strength". 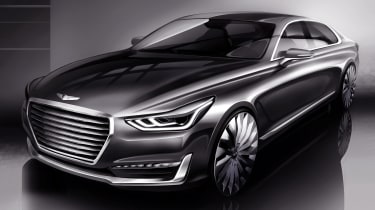 Woong-Chul Yang, head of Hyundai's R&D centre and vice-chairman of Hyundai Motor, said: "The Genesis models will provide technological innovation, excellent driving performance and luxury to customers. Every Genesis model will be created with the needs of our customers in mind."

Designer Luc Donckerwolke, who is moving to Hyundai having worked on Volkswagen Group brands including Audi, Skoda and Bentley, has been appointed to head up the company's 'Prestige Design Division' from mid-2016.

Donckerwolke will work under Peter Schreyer – another former VW Group designer – who is president and chief design officer of the Hyundai and Kia group.

Schreyer said: "In creating the design signature of Genesis brand cars, we set out to display confidence and originality, creating highly desirable products that present new charm through innovative styling and proportions."

Genesis isn’t the first new development from Hyundai this year: earlier in 2015 it announced the creation of a performance sub-brand, called the ‘N’ division. The company also recently launched the first mass-produced hydrogen-powered car, the ix35 Fuel Cell, based on the current Hyundai ix35 SUV.