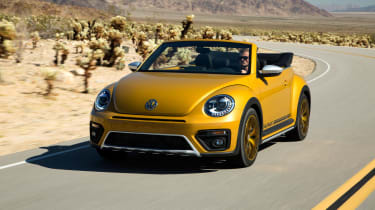 This is the new Volkswagen Beetle Dune, a model that’s been conceived as the spiritual successor to the Volkswagen dune buggies of the sixties. Originally shown at the 2015 LA Motor Show, it's on sale from the 5th April starting from £21,300.

The Volkswagen Beetle Dune is available as both a three-door hatchback and a convertible. In either bodystyle, the Dune is set apart from other Beetles by its increased ride height, new front and rear bumpers and LED rear lights. 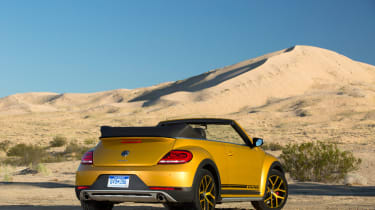 There’s a choice of five colours for the exterior, with Dark Bronze and Sandstorm Yellow exclusive to this model. There’s also unique ‘Dune’ badging around the car that helps make the car stand our against the rest of the range.

Inside, the Beetle Dune is based on mid-spec Design trim, so there’s the usual touchscreen infotainment system, Bluetooth phone connectivity and DAB radio, as well as automatic lights and wipers, front and rear parking sensors and an auto-dimming rear-view mirror.

The main differences inside are the unique Dune touches. There’s contrast stitching on the sports seats and leather steering wheel, while the Beetle’s body-coloured dashboard still features. 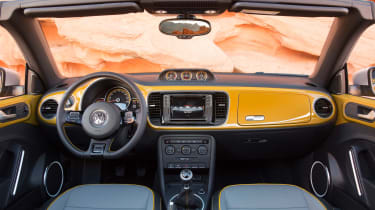 There are two engines to choose from - one petrol and one diesel. The petrol is a 1.2-litre TSI with 103bhp, which is good for 51.4mpg and CO2 emissions of 122-126g/km depending on the gearbox, while the diesel is capable of 62.8mpg and has CO2 emissions of 118-125g/km. Both engines come with a choice of six-speed manual or six-speed DSG automatic gearboxes.

Safety should still be impressive, too. The Dune features ABS, electronic stability control and rollover protection for the Beetle Dune Cabriolet. There are two ISOFIX points for child seats and tyre pressure sensors, also.

The Volkswagen Beetle Dune isn't the first 'Dune'-badged model to be sold in the UK. In 2004, the Volkwagen Polo Dune was offered, with a similar rugged look as this new Beetle.