Facelifted VW up! gets revised styling and new turbo engine

The Volkswagen up! city car has been updated with sharper looks and a new turbo engine 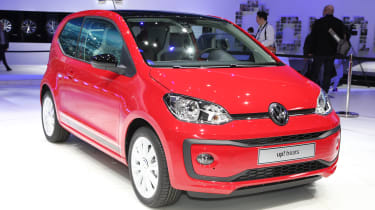 Since the Volkswagen up! launched, it’s been a popular choice for city drivers thanks to its nippy engine, funky styling and upmarket interior that belies its size and price. It’s now been updated, with revised styling and a new turbocharged petrol engine to boost its appeal. Now, it's made its public debut at the 2016 Geneva Motor Show.

Outside, the up! gets a revised front end with new bumpers and headlights, which now include LED daytime running lights as standard. There’s also a choice of 13 colours and a range of personalisation options, with nine sticker designs and three different colours for the roof. There are new lights and a sharper-looking bumper at the rear, too. 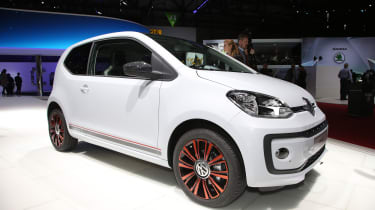 Inside, the car retains its upmarket feel, with new seats, a greater choice of colours for the dashboard, a new air-con system and a new multifunction steering wheel also used in the Volkswagen Polo and Volkswagen Golf. 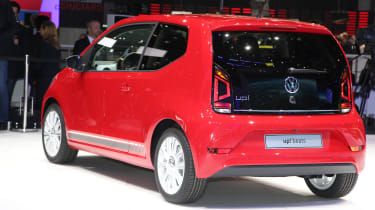 High up! is very well equipped, boasting features you’d normally find on much more expensive cars, including ambient lighting, heated seats and 15-inch alloy wheels. An all-new trim level has been added, too: the up! beats, featuring a BeatsAudio stereo.

Under the bonnet, there’s the same choice of 1.0-litre engines from the current up! range, but there’s also a new 1.0-litre TSI turbocharged petrol that produces 89bhp. This gets the up! from 0-62mph in 10 seconds and on to a top speed of 115mph. Fuel economy figures are still impressive, with the up! returning a claimed 64.2mpg and CO2 emissions of just 102g/km.

The new version of the up! will go on sale in the summer, with prices expected to start at the same £8,495 as the outgoing model. 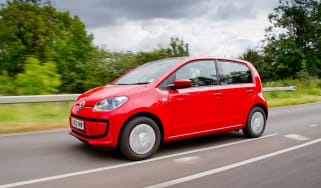