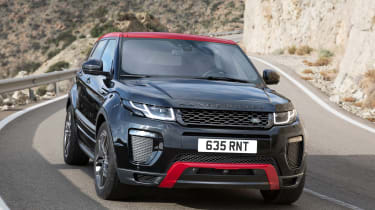 Land Rover has announced a raft of improvements for the latest iteration of its best-selling Range Rover Evoque SUV. Not only will the revised model get the latest technology – including some new off-road software and the latest InControl Touch Pro infotainment system – but it’ll also debut a new ‘Ember’ special edition.

Some trim levels will also now come with extra standard equipment, while more exterior colours will be offered and a new ‘Graphite Design’ exterior option pack will be available, too.

Mechanically, the car is unchanged, with the same four-wheel-drive system, petrol and diesel engines and manual and automatic gearboxes as before.

The new ‘Ember’ special-edition version (pictured) of the Evoque will get a contrasting Firenze Red roof, rear skid plate and front bumper trim, with the rest of the car finished in Santorini Black. It also gets the Black Pack exterior design package, which includes 20-inch satin-black alloy wheels, black badging and lettering, plus black exhaust-pipe tips and a Narvik Black grille, as well as darkened front and rear lights. 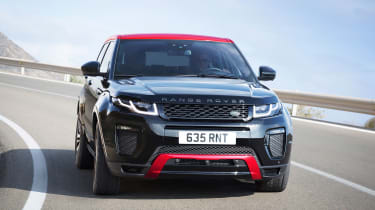 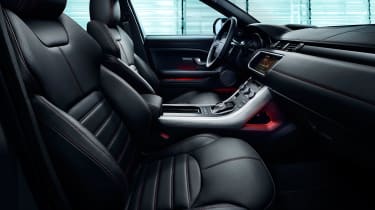 The Evoque Ember will only be available to order for three months this summer, with first deliveries expected in September. It’s priced starting at £47,200.

For 2017, the Range Rover Evoque (and the Evoque Convertible) will be available with a new InControl Touch Pro infotainment system.

Standard on the HSE Dynamic model and above and optional on the rest of the range, the new system uses a higher-resolution 10.2-inch touchscreen that recognises ‘pinch and zoom’, swipe and pan gestures. It also allows for door-to-door navigation (including public transport on your handheld device) and can send your estimated time of arrival to your friends so they’ll know if you’re running late.

It also features high-definition 3D maps and a bird’s-eye 360-degree camera to help you navigate narrow lanes, a particularly tricky off-road course, or even just a tight parking space. 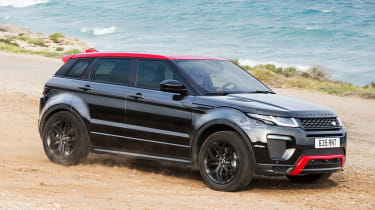 The 2017 model year range Rover Evoque will also see the introduction of a new ‘Low Friction Launch’ setting for the car’s all-terrain system. This manually selectable feature ensures the perfect getaway on slippery surfaces. Put simply, it works by limiting the amount of power sent to the wheels when you press the accelerator, thereby reducing wheel spin and improving grip.

Some Evoque trim levels have been given extra standard equipment as part of the 2017 shake-up. The SE Tech – priced from £33,000 – now gets 12-way power-adjustable front seats and automatic headlights that won’t dazzle oncoming drivers when you’ve turned on the full beams.

Elsewhere in the range, HSE Dynamic trim – which starts at £41,400 – and above get the aforementioned new InControl Touch pro infotainment system, in-car wi-fi, access to the InControl mobile apps and All Terrain Progress Control (on cars with an automatic gearbox). This last system keeps the car at a fixed speed (from 1-19mph) when off-road, allowing you to concentrate on steering, improving the Evoque’s already stellar off-road ability. 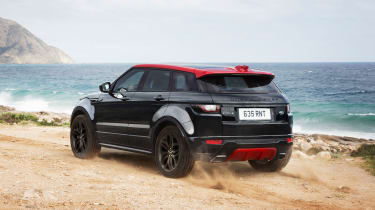 The 2017 Range Rover Evoque will also have four extra paint colours to choose from, bringing the total available to 18. The new shades are called Aruba, Farallon Black, Carpathian Grey and Silicon Silver. The revised car goes on sale in the summer, with prices starting at £30,600, while top-of-the-range Autobiography models start at £51,200 for a five-door with the 178bhp 2.0-litre diesel and an automatic gearbox. First deliveries are expected in September this year.