If you want a performance-orientated Fiat 500, the Abarth 595 is now faster than ever 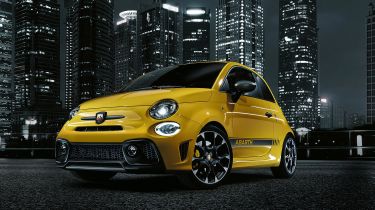 Starting from June, the fun-to-drive Abarth 595 hot hatchback will come with more power and standard equipment than before, as well as an upgraded interior. Its 1.4-litre engine now produces 143bhp (up from 135bhp) in standard guise, while the 595 Turismo sees power increase from 160 to 162bhp. The top-spec Competizione model produces the same 178bhp as before, but will now be available with an optional limited-slip differential. This driver-focused upgrade allows a different amount of power to be sent to each wheel, depending on how much grip is available. Fans will be able to see the hot Abarth hatch at this year's Goodwood Festival of Speed.

While exact performance figures have yet to be released, the extra power available is likely to endow the Abarth 595 with even more fizz than before. The current 595 goes from 0-62mph in 7.9 seconds, with the Competizione model capable of the same in just 5.9 seconds. 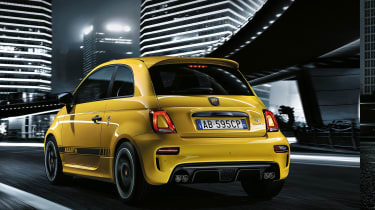 It’s not just the engine that’s had some attention, though. Just as the Fiat 500 received an update recently to keep it looking fresh, the Abarth 595 will get LED daytime running lights, upgraded rear lights and new 17-inch alloy wheels.

Inside, all 595s will come with Fiat’s five-inch Uconnect infotainment system, with the option of upgrading to a seven-inch version, complete with DAB radio and sat nav. Apple CarPlay and Android Auto are likely to become popular extras for drivers who need to stay connected, while music fans have the option of upgrading to a seven-speaker BeatsAudio stereo and a new flat-bottomed steering wheel aims to further enhance the Abarth 595’s sporty nature. These improvements bring with them a price increase of roughly £400. The standard 143bhp car now costs £15,090, while the Turismo is £18,290 and the Competizione £20,290.