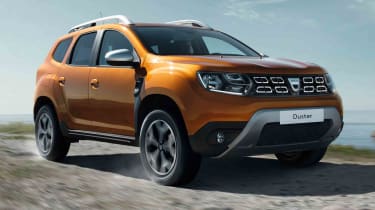 At the 2018 Paris Motor Show, Dacia announced two new petrol engines for the Duster SUV that'll arrive in 2019, along with an uprated infotainment system with Apple CarPlay and Android Auto connectivity.

Following its unveiling at the 2017 Frankfurt Motor Show, the new Dacia Duster SUV went on sale in the UK on 11 June, with prices starting from £9,995. Deliveries started in July.

Dacia says it has ensured the new car retains its predecessor’s winning combination of rugged styling, frugal engines and optional four-wheel-drive off-road ability. It gets an improved interior, thoroughly refreshed styling and a choice of two or four-wheel drive, as well as petrol or diesel power and four trim levels.

The new Duster is available with a choice of four engines: a 1.2-litre 113bhp petrol or a 1.5-litre diesel of the same power, plus the two freshly announced 1.3-litre petrols, with 128 and 148bhp respectively. These new petrol engines feature a particulate filter to improve emissions and will replace the 1.2-litre in early 2019; both new engines offer a step up in power over the previous petrol engines.

Two or four-wheel drive are offered, although if you want the latter with one of the new engines, you’ll have to wait until mid-2019. All come with a manual gearbox as standard, with no automatic option offered from launch.

The Duster gets some technological advances for its new generation: top-spec models have keyless entry for the first time, while climate control and a blind-spot warning system are also available.

Hill-descent control, hill-start assistance, a generous 210mm of ground clearance and (on four-wheel drive models) a compass and inclinometer help cement the Duster’s off-road credentials. The option of a multi-view camera system also helps during off-roading.

Dacia boasts that every panel of the latest Duster is new. The result is a more modern appearance that brings a larger grille, new LED running lights, new rear lights, a redesigned bonnet and revised rugged plastic skid plates. The car’s windscreen has moved forward and is now more steeply raked, too.

Inside, the Duster gets a redesigned, better-quality dashboard with a higher-mounted infotainment screen. The Duster’s infotainment is a new version of the Media Nav Evolution system and now includes Apple CarPlay and Android Auto, along with a more responsive touchscreen.

The seats have been redesigned to improve comfort and support, while noise on the move has been reduced thanks to extra sound deadening and thicker windows. There's an improved stereo and better interior storage space, too.

Despite the updates, boot space stays the same: 445 litres for the front-wheel-drive model or 376 litres in the four-wheel-drive car.

There are four trim levels on offer: Access, Essential, Comfort and Prestige. All come with LED running lights, stop-start and automatic emergency braking, plus a range of mandatory safety features like ABS and ISOFIX child-seat points.

Access trim starts at £9,995 and comes with 16-inch steel wheels and electric front windows; step up to Essential (£11,595) and alternate-style steel wheels are added, along with body-coloured front and rear bumpers, manual air-conditioning, a height-adjustable driver’s seat and DAB radio, plus Bluetooth connectivity. 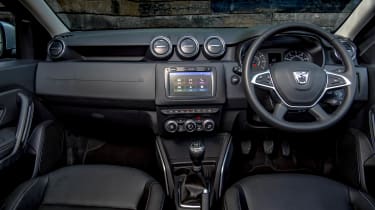 Comfort trim (£13,195) gets 16-inch alloy wheels, a front armrest, leather steering wheel and a rear parking camera plus sensors. Electric windows feature all round, while a seven-inch infotainment screen with sat nav is also added. Heated and power-adjustable mirrors are also added.