The all-new Toyota Supra was unveiled in Detroit, with 335bhp straight-six power priced from £52,695 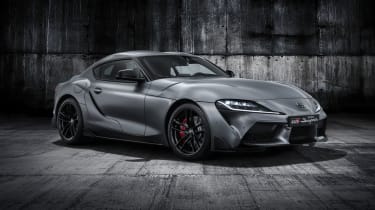 This is the all-new Toyota GR Supra, the new flagship sports car that’s set to take on the Alpine A110, Porsche 718 Cayman and the latest BMW Z4 – a car that shares much of its mechanical underpinnings with the Toyota. The Supra is the first car to be produced by Toyota Gazoo Racing – the Japanese firm’s racing arm – for international sale.

The new car is on sale now, with prices starting from £52,695, with the range-topping A90 Edition model priced at £56,945. Previously, buyers could register their interest by putting down a £1,000 deposit for one of just 300 examples of the new sports car set to be available to UK buyers this year. Once all 300 examples have buyers, additional customers will be put on a waiting list; the first 90 European buyers will be offered an exclusive A90 Edition car, with unique features including red leather upholstery and ‘Storm Grey’ paintwork. A total of 900 cars will be available in Europe in the Supra’s first year on sale.

The prototype of the new Supra made its world debut at the Goodwood Festival of Speed in July 2018 and we drove the car under disguise in September 2018.

The Toyota GR Supra is a two-seater, rear-wheel drive coupe powered by a twin-turbo straight-six 3.0-litre petrol engine. The Supra’s design was first previewed by the 2014 Toyota FT-1 concept car; elements like the aggressive rear lights, flicked-up spoiler, large vents and wide-hipped wheel arches have found their way to production. Toyota claims that the GR Supra’s long bonnet and double-bubble roof pay homage to the Toyota 2000GT of the 1960s, while the front and rear-end styling hark back to the fourth-generation Supra of the 1990s.

In an effort to make the car exciting to drive, Toyota has given the GR Supra a shorter wheelbase than the current Toyota GT86 coupe, but with wider tyres – a combination that Toyota claims offers ‘a high level of manoeuvrability and stability’. 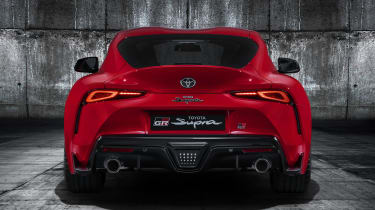 LED lighting features front and rear, while 19-inch forged alloy wheels with black and polished spokes will feature as standard.

Inside, the Toyota GR Supra features a modern, pared back interior that’s designed to help the driver focus on the driving itself. The dashboard is low and offers a clear view out of the windscreen, while all major controls are grouped together for ease of use.

A head-up display features, along with an 8.8-inch display in place of traditional dials, plus another 8.8-inch infotainment screen that’s similar to the iDrive system used in the BMW Z4, the Supra’s relative.

Gazoo Racing’s circuit and rallying experience has filtered down to the Supra’s seats and centre-console knee pads, both of which help put the driver in the optimal position for high-speed driving. The seats can be finished in leather or a combination of leather and Alcantara. 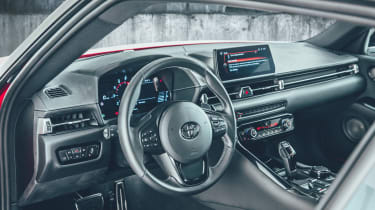 Toyota claims that the GR Supra has a boot that’s large enough for weekend luggage for two; the load area can be expanded with a removable panel to make room for a golf bag.

It's no secret that the Supra shares its engineering fundamentals with the new BMW Z4, but the Toyota is only offered as a coupe. The Z4 has a folding roof and is expected to hit showrooms a little earlier than the Supra.

The Toyota GR Supra is powered by a 3.0-litre, twin-turbo straight-six petrol engine with 335bhp – the same basic engine as found in the BMW Z4 M40i. The engine is paired with an eight-speed automatic gearbox with gear-shift paddles.

The Toyota GR Supra was developed extensively at the Nurburgring racing circuit in Germany to make sure that its handling and performance can challenge those of rivals such as the Porsche 718 Cayman and Alpine A110. Ingredients like perfect 50:50 weight distribution, complex suspension, Brembo brakes and standard Michelin Pilot Super Sport tyres all bode well.

The new Toyota GR Supra will be offered in two trim levels from launch: Active and Premium.

Active models come as standard with an active differential, adaptive suspension, 19-inch alloys and high-performance brakes. Dual-zone air conditioning, adaptive cruise control with stop and go, keyless entry, a leather steering wheel and adaptive LED headlights all feature, along with auto-dimming mirrors all round, automatic wipers and a rear-view camera.

Electrically adjustable, heated black Alcantara seats with a memory function are standard, as is a 10-speaker hi-fi system with an 8.8-inch infotainment screen with Bluetooth connectivity. 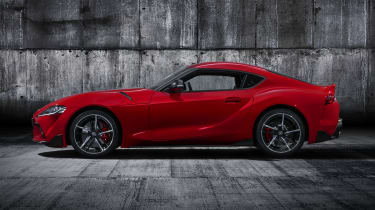 Previously, Carbuyer was offered the chance to drive a prototype version of the new Toyota GR Supra. Early driving impressions of the first Toyota Supra for decades suggest it's going to be a corker - despite the prototype still being some way from production. Gazoo Racing - Toyota's motorsport division - has concentrated on giving the Supra all the fundamental traits required in a great sports car, pushing its engine as far back as possible towards the windscreen for perfect weight distribution and balance. 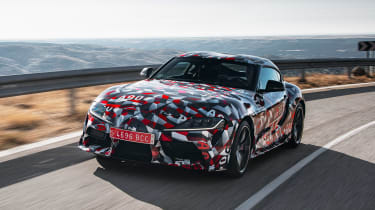 The result is a feeling of poise, even just sitting in the Supra before you fire up its engine. There's a sensation of sitting almost above the rear wheels, with a long bonnet reaching ahead of you, just like a traditional sports car. Fire up the engine and it sounds deep and characterful where the Toyota GT86 sounds thin and coarse.

Even at this early stage, there's an impressive polish to how well the controls all mesh together, giving the Supra a flow between corners that feels as precise as the Alpine A110. A 3.0-litre straight-six engine (producing around 300bhp) also gives the Supra prototype the straight-line speed of a Porsche Cayman GTS. The Ford Mustang and Audi TT RS may all need to up their game in 2019 if the Supra really is an iconic Toyota in the making.

If you can't wait until summer, check out Carbuyer's best sports cars to buy now for more options. 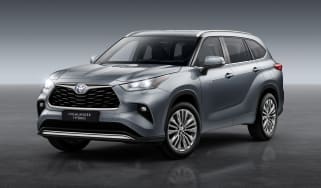