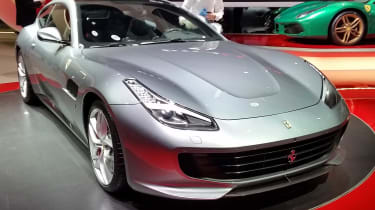 The 2016 Paris Motor Show saw the unveiling of the new Ferrari GTC4Lusso T. If that name seems familiar, the car is very similar to the GTC4Lusso that arrived earlier in the year as an update of the brilliant FF.

However, there are a few differences between the two. For starters, the standard GTC4Lusso uses a spine-tingling naturally-aspirated 6.3-litre V12, and the new model does not. In fact, the new T model is, according to Ferrari, the first turbocharged four-seater model in the brand’s history, using a twin-turbocharged 3.9-litre V8. 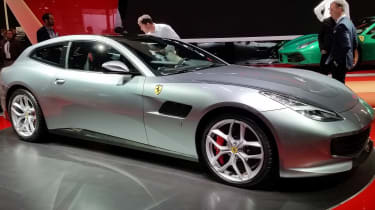 Another key difference between the two is the fact that the Lusso T has ditched the standard car’s innovative four-wheel drive system (which in itself was another Ferrari first) in favour of rear-wheel drive.

Ferrari says that this decision was made to give the Lusso T a sportier, more agile driving experience than the more powerful, faster natural-aspirated version. The company has also tweaked the new engine’s exhaust note to give it a unique sound compared to other models in the range.

As well as the new engine, it gets innovative four-wheel steering and a host of hi-tech driver aids. The GTC4Lusso T is set to be one of the more usable everyday Ferraris, thanks to its reasonably large boot, four seats and, relatively speaking, much improved fuel economy and emissions.

That new engine has been lifted from the back of the Ferrari 488 GTB and detuned to produce 593bhp. Despite this, the car will still do 0-62mph in just 3.5 seconds, while it has a top speed in excess of 198mph. It sends its power to the rear wheels only through a seven-speed dual-clutch automatic gearbox. 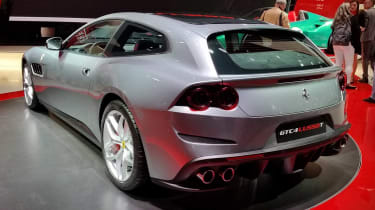 This’ll be one of the less expensive Ferrari models to run, although you’ll still need deep pockets to keep it going. According to official figures, it’ll return around 24.3mpg, while CO2 emissions of 265g/km still put it in the top £515-a-year tax bracket. Ferrari is also claiming that the new car will have a 30% greater range than the V12-powered model.

In order to keep all that power in check, the GTC4Lusso T comes with what Ferrari calls ‘Side Slip Control 3’. This is a combined traction and stability-control system that’s designed to make the car as fast around corners as possible. It also features four-wheel steering, which means the rear wheels turn slightly in the same direction as the fronts to make the car more agile, but without endangering stability at high speeds.

There are no differences between Lusso and Lusso T in terms of styling, with the T keeping the two-door hatchback/estate/coupe ‘shooting brake’ bodystyle. Inside it gets Ferrari’s latest infotainment system, which is controlled from a 10.25-inch HD touchscreen on the dashboard.

There’s no word yet on prices, but expect a significant drop from the V12 car’s £230,000 figure, with the possibility of it starting at under £200,000. First deliveries in the UK are expected early next year. 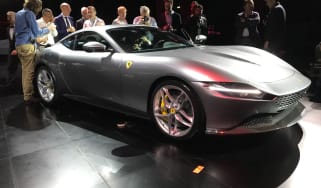