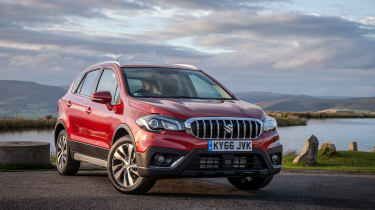 The Suzuki SX4 S-Cross has been updated with a choice of more sophisticated engines for lower fuel consumption and emissions as well as improved performance. The small crossover has optional four-wheel drive and offers a practical alternative to family cars such as the Ford Focus, Vauxhall Astra and Volkswagen Golf.

The SX4 S-Cross first went on sale in October 2013 as one of the first small crossover vehicles, competing with the Nissan Juke and Vauxhall Mokka. It has become known simply as the ‘Suzuki S-Cross’ and now boasts raft of improvements to increase its appeal. 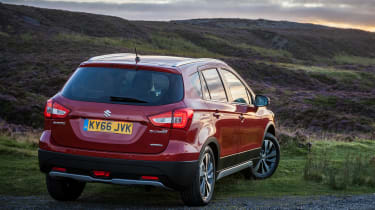 New to the latest S-Cross is Suzuki’s ‘Boosterjet’ petrol engine, which first appeared in the Suzuki Vitara. The 1.0-litre turbocharged engine also features in the Suzuki Baleno and in the S-Cross it develops 109bhp.

It also brings CO2 emissions down markedly compared to previous petrol versions of the S-Cross: they now stand at 113 grams per kilometre for the 1.0-litre front-wheel-drive model, rising to 119g/km with optional automatic transmission. That means £30-a-year road tax as long as you buy before April 2017, when a revised road-tax system comes into force.

The 1.4-litre Boosterjet turbocharged engine is also set to appear in the S-Cross, generating 148bhp, which is significantly more than the outgoing 1.6-litre normally aspirated petrol managed. The 1.4-litre is also said to have better low-down pulling power, while fuel consumption has improved by a claimed 10% and CO2 emissions have dropped to 127g/km when a manual gearbox is fitted, for £110 a year road tax on cars bought before next April.

The 1.4-litre Boosterjet should provide more spirited performance than the 1.6-litre, as the 0-62mph time comes down from 11 to 10.2 seconds whether the car is fitted with a manual or automatic gearbox.

The 2017 S-Cross engine range is completed by a 118bhp 1.6-litre DDiS diesel, which has seen its fuel economy improved to 66.8mpg and CO2 emissions drop to 106g/km, or 114 with Suzuki’s ALLGRIP selectable four-wheel-drive system, so road tax is £20 a year if you buy before April. Four-wheel drive is available on the SZ-T and SZ5 trim levels and gives you four selectable modes to suit different terrain. 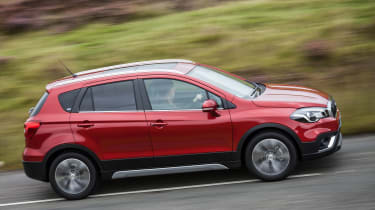 The Suzuki SX4 S-Cross first went on sale in the UK in October 2013 as the first of the maker’s cars to blur the line between compact SUV and family hatchback. It’s one of the smallest crossovers on the market and has been made rather more distinctive for 2017.

The bright new front grille is unmistakeable and attracts the eye far more than the outgoing car’s. It’s flanked by updated, reshaped and more efficient headlights. Ground clearance has been slightly increased, too, giving the S-Cross a more imposing presence, while new LED lights give the rear end a more up-to-date look. 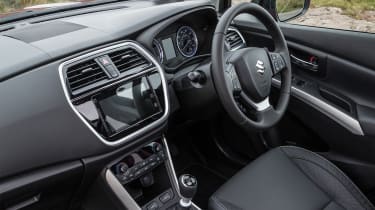 The S-Cross’ interior has been refreshed with better soft-touch materials and bright finishes to frame the centrally-mounted stereo and ventilation controls. Extra stye is added by new seat fabrics for the SZ4 and SZ-T models, but the basic layout is unchanged and remains comfortable for five, while the panoramic glass sunroof fitted to the SZ5 model is claimed to be one of the largest in its class.

There’s plenty of equipment in the latest S-Cross, with even the entry-level SZ4 boasting DAB digital radio, air-conditioning and cruise control with a speed limiter. Outside, you’ll find rugged-looking black wheelarch mouldings and protective skid plates, as well as 16-inch alloy wheels and heated door mirrors.

Upgrading to SZ-T equips the car with dual-zone climate control, sat nav, parking sensors all round and a rear parking camera. LED headlights are fitted to this model, as are front foglamps and rear privacy glass. Silver skid plates replace the black ones on the SZ4 and upgraded 17-inch alloys are also fitted. Suzuki says the SZ-T is intended to be popular with fleet buyers, but it looks a sensible specification for private owners, too.Top of the range is the SZ5, which receives a leather interior with heated front seats as well as a large sliding panoramic sunroof. This car also sees the benefit of Radar Brake Support, a system that will apply the brakes automatically if it detects a collision is imminent.

The updated Suzuki SX4 S-Cross will appear in UK showrooms on 17 October, with all models enjoying Suzuki’s standard three-year/60,000-mile warranty. Pricing hasn’t yet been released, but we’ll be publishing that information as soon as we receive it.