"The Suzuki Baleno is a practical supermini thanks to its roomy interior. In fact, it gets a lot right, but can’t match all its rivals for material quality"

Over recent years, Suzuki has sold two distinct types of cars in the UK, satisfying either buyers of affordable SUVs, or those after a frugal and fun supermini. The Suzuki Baleno fits into the latter group, but also offers a bit more space.

With more conservative styling than most rivals – and the recently announced Suzuki Swift replacement – the Baleno is a rival to superminis like the Skoda Fabia, Kia Rio and Dacia Sandero, which prioritise practicality and value. In fact, the Baleno has one of the biggest boots in its class, along with plenty of space for passengers.

In terms of roominess, the Baleno is almost between classes, offering almost as much carrying capacity as models like the Ford Focus, Volkswagen Golf and SEAT Leon from the family hatchback segment, but with a lower price tag. You can, however, see the savings inside, where there’s a lot of grey plastic instead of the soft-touch black trim found in supermini's like the Volkswagen Polo. 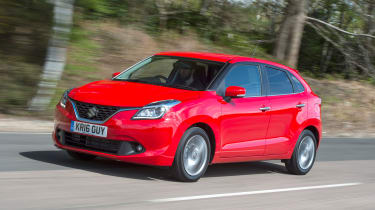 Happily the Baleno is full of standard equipment, which should at least help distract buyers from the lacklustre interior. Impressively, you even get sat nav from the off, along with alloy wheels and air-conditioning, setting it apart in the class.

The engine range is very simple, with either a 1.2-litre petrol engine with 89bhp or a 1.0-litre ‘Boosterjet’ petrol with 111bhp thanks to its turbocharger, despite only having three cylinders. We recommend the latter, which is a more advanced engine with slightly more power than the equivalent Fiesta and Corsa and CO2 emissions of 105g/km.

While most versions of the Baleno cost the same £140 in annual road tax, there’s a mild-hybrid SHVS version of the 1.2-litre which returns the best fuel consumption of 70.6mpg, costs £130 in road tax and represents a great buy for company-car drivers, thanks to its low 15% Benefit-in-Kind (BiK) rating. The 1.0-litre Baleno returns 62.8mpg, while the standard 1.2-litre manages 67.3mpg. There’s also a 1.0-litre with an automatic gearbox, but this drops economy to 57.6mpg.

As a brand, Suzuki has a good reputation for reliability and finished 15th out of 27 manufacturers in our overall 2017 Driver Power owner satisfaction standings. With mainly smaller engines, it could only manage 23rd for performance, however. Safety is one potential cause for concern, with the Baleno scoring four out of five stars in Euro NCAP crash tests when fitted with a safety pack (with autonomous emergency braking), and three stars without it. It scored between 80 and 85% for adult occupant protection.

Our list of the top 10 small company cars will ensure your monthly Benefit-in-Kind bills are kept in check.
Skip to ContentSkip to Footer