Running costs should be fairly low from both petrol models

The Baleno was the first car to showcase Suzuki's turbocharged 1.0-litre 'Boosterjet' engine in the UK market. It's an impressive engine, capable of competing with the smallest EcoBoost engines offered in the Ford Fiesta and Ford Focus. 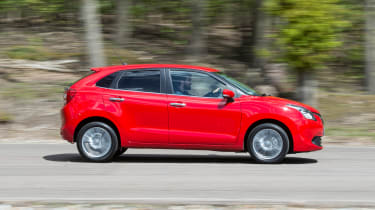 The 1.0-litre Boosterjet is a small three-cylinder engine that relies on its turbocharger to deliver a respectable amount of power. It’s impressively economical, returning 62.7mpg with a manual gearbox while emitting 105g/km of CO2. Choose the optional six-speed automatic gearbox and these figures suffer slightly – economy drops to 57.6mpg and CO2 emissions rise to 115g/km.

The Baleno SHVS, a mild-hybrid powered variant, uses a 1.2-litre, 88bhp four-cylinder petrol with an electric motor, and a generator incorporated into the starter motor to assist the car during hard acceleration. Suzuki’s projected CO2 emissions figures tell us it'll emit just 94g/km. Fuel economy for this version is a claimed 70.6mpg.

Standard versions of the Baleno all cost £140 a year in road tax, while the SHVS will be £10 less thanks to its hybrid powertrain. The mild hybrid is also the version to seek out if you're a company-car driver, thanks to its low 15% BiK rating. The 1.0-litre Boosterjet Baleno is in the 18% bracket, while adding an automatic increases this to 20%.

The Suzuki Baleno will require annual servicing once a year or every 9,000 miles. Fixed price service packages are available, and service payment plans can be arranged to spread the cost of maintenance.

Like all Suzukis, your Baleno will come with a three-year/60,000-mile warranty, which is about average for this type of car. You do get a longer warranty with rivals the Toyota Yaris, Hyundai i20 and Kia Rio.