The 110bhp 1.0-litre three-cylinder petrol is efficient and powerful; it can be a little noisy, though

Performance is unlikely to be the top priority when buying a car in the Baleno’s class but a decent turn of speed can make ownership more enjoyable.

At low speeds, the Baleno remains fairly quiet, but get it out on the motorway and that initial impression fades. Both engines get a little noisy when pushed hard but once you’re up to motorway speeds, road and wind noise tend to drown everything else out.

The low weight makes the car feel agile and nippy, too, and although the steering feels slightly vague, body lean is mostly well controlled and there’s plenty of grip.

Unfortunately, the ride isn’t quite as well sorted, with the Baleno coping poorly with big bumps in the road. This leads to the car bouncing around on poor road surfaces and potholes and lumps sending jolts through to the interior. 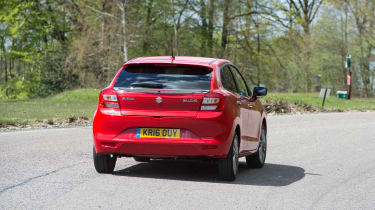 The Baleno's 109bhp turbocharged 1.0-litre three-cylinder petrol engine is pretty impressive. It has plenty of oomph and revs freely. You have a choice of either five-speed manual or six-speed automatic transmission. So far, we’ve only driven the manual and it’s a good gearbox, with a short, sharp and accurate shift action.

The Baleno feels quite quick, too, thanks in part to its 935kg kerbweight (100kg less than the Suzuki Swift). It'll go from 0-62mph in 11.4 seconds and onto an impressive top speed of 124mph, so it does feel easily fast enough to keep up with traffic in town and out on the motorway.

Performance from the 1.2-litre hybrid version isn't quite as impressive, with 0-62mph taking 12.3 seconds and top speed being a bit lower, at 111mph. This engine is smooth and quiet around town and at low speeds, but gets noisier the more you rev it. You'll need to as well: with no turbocharger, this engine feels lethargic at low revs, but outright performance is reasonable given the fuel economy.