One of the most practical superminis you can buy, with a big boot and plenty of space in the back

As one of the largest superminis, the Suzuki Baleno looks like a force to be reckoned with when it comes to practicality. It’s here that its extra bulk when compared to its smaller Swift sister comes into its own. But being a useful size isn’t enough on its own – a car has to be well designed in order that this size can make itself useful. However, we feel that the Baleno could be even more practical if its design was a little more considered.

There's plenty of room for passengers in the front and back. Taller rear-seat passengers might complain about headroom, but there shouldn't be too many issues for most. The doors open wide, too, making it easy to get in and out. There’s a decent amount of storage space, too. The glovebox can easily hold a large water bottle, while the door pockets are pretty roomy, too.

This is the Baleno’s trump card. There’s no doubting that, for the money, you get a huge amount of space. The boot is massive – holding 320 litres with the rear seats in place. This is more than you get in the Ford Focus (316 litres) and not too much smaller than the larger Volkswagen Golf and SEAT Leon’s 380 litres of boot space. 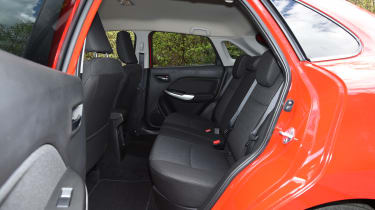 All these cars are from the class above, while the Baleno’s direct rivals – the Skoda Fabia, Ford Fiesta and Vauxhall Corsa – can’t get near it. Drop the rear seats (which can also split 60:40) and you get even more space.

Our one small gripe is the fact that there’s a fairly big boot lip, and when you fold the seats down, there's no lip between them and the boot floor, so you can slide items in and out easily. There's some extra storage beneath the boot floor, too.