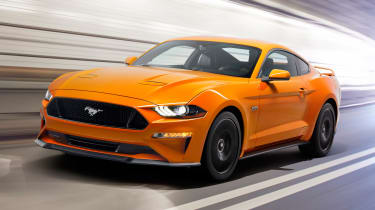 Ford has released details and images of the revised Ford Mustang coupe and convertible. The most significant changes are a redesigned front end, increased power for the V8 model and improved in-car technology. The car will go on sale in 2018.

The nose of the car has been made to look more aggressive thanks to a new bonnet that incorporates air vents and curves towards the front of the car to give the nose a lower, leaner look. The upper and lower grilles have been made narrower, while the new all-LED headlights are slimmer, too.

Changes to the rear of the car are less noticeable, with a redesigned rear bumper, revised LED lights and an optional new spoiler. The entry-level 2.3-litre EcoBoost model gets a twin exhaust as standard, while the V8 GT comes with a quad exhaust.

Ford will add 12 alloy wheel designs and more paint colours to the options list to give Mustang buyers more choice in how their specific cars look. 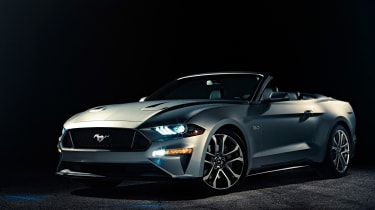 Ford isn’t giving us exact figures at this stage, but the Mustang’s 5.0-litre V8 has been ‘thoroughly reworked’ to give the facelifted version more power. The current V8 GT has 410bhp, so expect a figure for the 2018 version to be nearer 450bhp.

Ford has improved and upgraded elements of the suspension to enhance the Mustang’s cornering ability and MagneRide damper technology will be offered as an option with the Mustang Performance Package “to optimise ride and handling in all situations”.

The manual gearboxes in both Mustang models have been upgraded to deliver improved performance, while a new 10-speed automatic will be offered as an option in both. The V8 model will also be available with an active valve exhaust system that’ll open to allow more noise from the engine when desired.

The inside of the 2018 model gets some plusher materials, as well as a 12-inch digital LCD screen that will be available at extra cost. A heated leather steering wheel will join the LCD screen on the options list.

Exact prices and specs haven’t been released for the facelifted Mustang yet, but more details will emerge as the car’s on-sale date approaches. The 2018 Mustang will go on sale early next year. 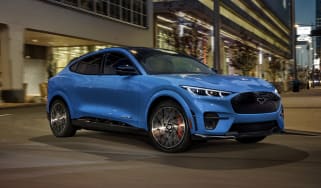