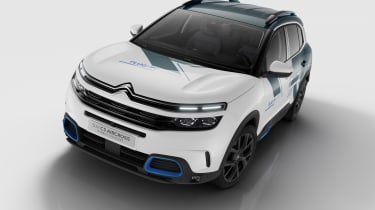 This is the new Citroen C5 Aircross SUV. It’s set to join the French manufacturer's range with prices starting from £23,225. Order books open in December and the C5 Aircross officially goes on sale on 4 February 2019. The new range-topping SUV will be a direct rival for mid-sized family SUVs like the Peugeot 3008, Nissan Qashqai and Mazda CX-5.

The Citroen C5 Aircross will be available with a choice of petrol or diesel power from launch and in three trim levels: Feel, Flair and top-spec Flair Plus. Up-to-date safety and infotainment systems feature, along with exterior and interior styling that fits into the brand’s wider SUV lineup. A petrol-electric plug-in hybrid version has been confirmed for release in 2020.

The initial line-up will consist of two petrol and three diesel engine and gearbox combinations for the C5 Aircross. The 128bhp 1.2-litre PureTech 130 comes with a six-speed manual gearbox, while the 1.6-litre PureTech 180 offers an eight-speed dual-clutch automatic gearbox.

Diesel options are the 1.5-litre BlueHDi 130, with six-speed manual gearbox, or with stop start technology and the automatic gearbox. The latter is also offered with the 2.0-litre BlueHDi 180. 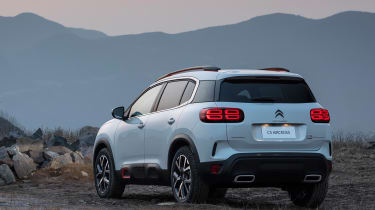 A plug-in hybrid version will arrive in 2020; Citroen claims will offer low emissions and a 60-kilometre (37-mile) driving range in all-electric EV mode.

Citroen is yet to announce fuel economy figures for the new C5 Aircross, but emissions figures look to be respectable for this type of car. The cleanest model is the automatic BlueHDi 130, which emits between 106 and 107g/km of CO2 depending on trim; the most powerful PureTech 180 petrol model emits up to 131g/km.

All models are front-wheel drive, but 'grip control' is available for greater traction on tricky terrain. You can choose Sand, All-Road and Snow modes, or switch the system off altogether. All settings use the car's ESP system, as do the Aircross' hill-start assist and trailer stability control systems.

Citroen says the C5 Aircross will stay true to the brand’s 'advanced comfort' ethos when it takes its position at the head of Citroen's range. Shock absorbers with 'progressive hydraulic cushions' are a feature inspired by Citroen's rallying experience, and work together with the seat design to protect occupants from jolts in the road, for a 'magic carpet' ride.

The C5 Aircross uses PSA's EMP2 platform, which is shared by the DS 7 Crossback, Vauxhall Grandland X and Peugeot 5008. There'll be a choice of petrol and diesel engines at launch, with the plug-in hybrid following later.

The C5's design is less angular than the Nissan Qashqai and is in keeping with the design language familiar from the C3 Aircross and C4 Cactus. Standing tall, with a ground clearance of 230mm, the biggest Citroen has a real sense of bulk, especially when 19-inch wheels are fitted. Personalising the Aircross to you taste should be simple – there are 30 colour combinations available when you factor in the roof bars, body, bumper and airbumps.

There are plenty of distinctive touches, from the prominent silver highlight that surrounds three sides of the window glazing, to the sill panel airbump that's picked out in the same colour as the lower front bumper intake and roof bar supports. The slim, two-tier LED headlamps are incorporated into a horizontal grille, the upper lights housing the daytime running lights and indicators, and flow into a chrome double-chevron.

Black rear side pillars are part of a glazed band that wraps continuously around the car, and support a 'floating' roof. A sense of ruggedness is imparted by roof bars and protective black mouldings for the wheel arches, which flow into the sill panels. The rear lights use LED technology to create a unique visual signature of four squares on each side of the car.

The C5 Aircross interior features an instrument cluster that is a 12.3-inch colour screen, customisable to display the driver's preferred information in any of three different graphical styles. Its counterpart is an eight-inch touchscreen, mounted centrally and flanked by vertically stacked air vents. 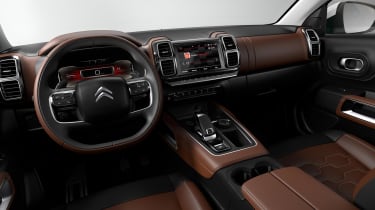 A large central console between driver and passenger incorporates backlit cupholders, cooled storage for a 1.5-litre bottle, and a smartphone charging space. The seats, meanwhile, use multi-layered high-density foam for long-distance comfort and longevity.

As well as long-distance comfort, the C5 Aircross offers plenty of luggage space; it ranges from 580 to 720 litres depending on the position of the rear seats, and 1,630 litres if you measure from floor to ceiling with the rear seats folded out of use. In the latter configuration, items up to 1,907mm will fit, while you can almost fit a metre-long load with the rear seats in place. A hands-free tailgate promises to make life easier too.

C5 Aircross technology starts with the 12.3-inch instrument cluster display, which presents configurable information in three different graphical ways, at a distance that keeps all information in the driver's line of sight.

Meanwhile, passengers are kept entertained by a tablet-style eight-inch centre infotainment screen with a capacitive display, which controls the car's multimedia, communications and climate control systems. It offers TomTom Traffic and sat nav, as well as Android Auto, Apple CarPlay and Mirror Link, which enables smartphone apps to be used via the touchscreen.

The C5 Aircross also brings impressive driver assistance technology to the Citroen range. Collision risk alert warns the driver if a front impact seems imminent, and will deploy autonomous emergency braking if the driver doesn't intervene. There's also active lane keeping assistance and adaptive cruise control that can bring the C5 to a halt and move off again in stop start traffic. Extended traffic sign repeats warning signs on the dashboard, and the cruise control can be adapted to suit speed limits at the touch of a button. 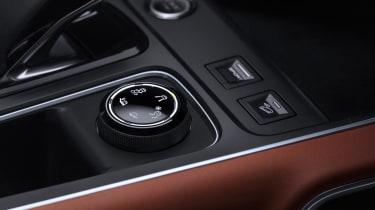 Combining the systems above gives you 'highway driver assist', which will manage steering, acceleration and braking to keep the driver in their chosen lane. No steering input is required, but the system will not remain active if hands are removed from the wheel. There's a two-stage driver fatigue assistance system; firstly a 'coffee break alert' that sounds after two hours driving above 70km/h, and secondly a driver attention alert, which monitors road position against road markings, and warns if inattentive driving is detected.

ConnectedCAM is an interesting feature. It uses a camera in the interior mirror to record the road ahead, automatically saving a video recording in the event of an accident. Owners can also use it to record images or videos of journeys or scenery, which can be downloaded from a 16GB memory card by email, for sharing on social media.

Citroen has claimed that 80% of its range will have ‘an electric option’ by 2023, climbing to 100% by 2025. The Citroen C5 Aircross Hybrid Concept is the first step towards these goals, previewing technology that’ll be used in both Citroens and other PSA cars, including those from DS, Peugeot and Vauxhall. More details will be available when the car is fully unveiled, but a total power output of 300bhp has been suggested previously for the plug-in hybrid, along with an electric-only range of 37 miles.

To see how the current model fares against the stiff competition in its class, take a look at our current Citroen C5 Aircross review. 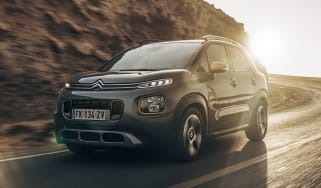 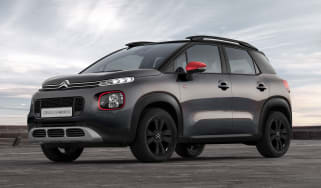