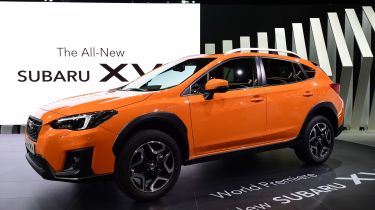 Subaru has revealed its new XV SUV at the Geneva Motor Show, ahead of UK sales commencing this year

The new model was previewed by the Subaru XV Concept at Geneva a year ago and the production model is little changed from the look of the concept. It’ll compete with compact SUVs such as the Nissan Qashqai, Honda CR-V and Mazda CX-3, but has more rugged appeal.

Where front-wheel-drive SUV-styled rivals struggle off the beaten track, the Subaru XV has genuine all-terrain capability to back up its looks, with high ground clearance and four-wheel drive as standard on all models. 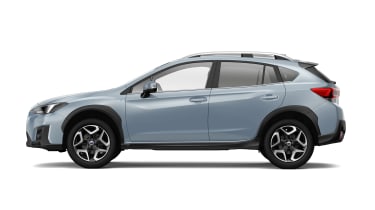 The Subaru XV SUV is new from the ground up, being based on the Japanese company’s latest global vehicle platform. It looks every inch a Subaru, with a prominent grille and swept-back headlights, while interest is added to its flanks by a triangular valley running along the upper door surfaces, giving the impression of a lower height. The overall profile of the car is less traditional, boxy SUV and more sporty hatchback.

Meanwhile, the car’s four-wheel-drive nature is emphasised by huge wheelarches, which are capped by no-nonsense black plastic mouldings, signifying that the XV isn’t afraid to tackle the rough stuff. This is further borne out by the new platform, which is said to be considerably stiffer than that of the previous XV, while a high ground clearance bodes well for off-road agility.

The interior design hasn’t yet been revealed, but we’re promised lots of space and a real improvement on perceived quality compared to Subaru’s present line-up. An eight-inch touchscreen controls an infotainment system with up-to-date connectivity features.

The engines in the new Subaru XV stay true to the brand’s loyalty to the ‘boxer’ format, with a 154bhp flat-four 2.0-litre petrol offered as the entry-level model. It’s a revised version of that used in the previous XV, with claimed improvements in fuel efficiency and lightness. It runs through a standard CVT automatic gearbox, which has a manual mode that sees it behave like a seven-speed clutchless manual. 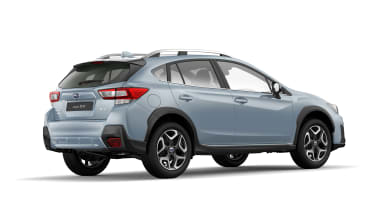 In 2016, Subaru’s UK marketing director Chris Hawken told our sister title Auto Express that Subaru is unlikely to move away from the boxer engine. He also mentioned that the next generation of XV "will have electrification in the range”. This means it’s a safe assumption that there’ll be a hybrid version of the new car. Rumours that Subaru is developing a mid-engined hybrid sports car using a 1.6-litre boxer engine fuel the possibility of that engine making its way into the XV.

The new XV employs a four-wheel-drive system with X-MODE, which can individually brake wheels that aren’t able to grip – a boon when crossing rough or slippery terrain. On-road handling is also said to have been tweaked, thanks to torque-vectoring and a lower centre of gravity than the outgoing model.

The latest XV has a longer list of safety features than before, with lane-keeping assistance, adaptive cruise control and pre-collision braking all available. It arrives in UK showrooms later this year and although pricing has yet to be confirmed, we don’t expect a big change from the outgoing model, which started at £22,180.