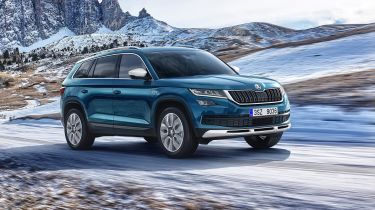 Skoda has added rugged scout and dynamic Sportline versions to the Kodiaq SUV range, boosting the model’s appeal to customers

The new Skoda Kodiaq Scout builds on the car’s chunky looks, adding underbody protection, unique silvered panels and exclusive alloy wheels and comes as standard with four-wheel drive. It follows in the footsteps of Scout versions of the Fabia, Roomster and Octavia, each of which visually emphasised the car’s all-terrain capabilities.

In addition to four-wheel drive, Skoda is fitting all Kodiaq Scouts with its ‘rough road’ package, which sees the car’s brake lines, fuel pipes and engine protected by extra cladding. The hill-hold and hill-descent systems, meanwhile, should confer even novice ‘greenlaners’ with extra confidence and abilities.

Meanwhile, buyers less tempted to venture off-road can choose the aggressively styled Skoda Kodiaq Sportline, which has been designed to be more fun to drive than the regular Kodiaq.

Like the Scout, four-wheel drive is fitted as standard, while 19-inch wheels lend an athletic stance. Black highlights to the bodywork, radiator grille, roof rails and mirror housings are exclusive to the Sportline, while the protective side trims are finished in body colour. 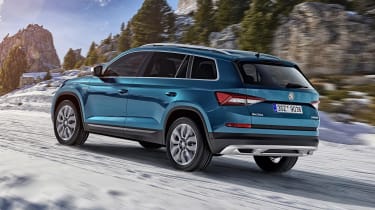 The Kodiaq Sportline is also based on the SE trim level, with the addition of sports seats (power-adjustable on the driver’s side) trimmed in Alcantara suede with silver stitching. The steering wheel and gear selector are leather trimmed and folding mirrors with puddle illumination are fitted, as is multicoloured interior LED lighting. 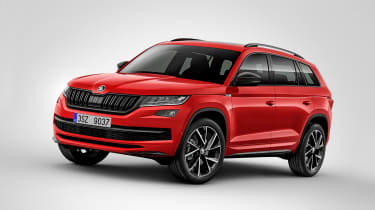 All Sportline models have a dual-clutch DSG automatic gearbox connected to four-wheel drive. As well as the driving modes of the Scout, the dashboard can display turbocharger pressure, engine output and even cornering G-force. Adaptive damping is available as an optional extra, with comfort, normal and sport settings that adjust how firm the suspension is.

The Skoda Kodiaq Scout and Sportline will be offered with a choice of four engines. Those picking petrol can have a 148bhp 1.4-litre or 178bhp 2.0-litre engine, both of which are turbocharged. A 2.0-litre diesel engine, meanwhile, is available with either 148 or 187bhp.

Four-wheel drive is fitted as standard to both models, with power usually sent to the front wheels only to maximise fuel economy. Sensors constantly monitor the road conditions, transmitting power to the rear wheels only when necessary.

There’s no word on pricing yet, but given specifying the Skoda Octavia in Scout format adds £2,000 to an equivalent SE car, it’s reasonable to expect the Kodiaq Scout to start at £27,500 for the 1.4-litre 148bhp petrol model. Sportline models are expected to cost a little more than the Scout, reflecting the extra equipment fitted. We’ll have more details once both models are officially unveiled at the Geneva Motor Show in March.