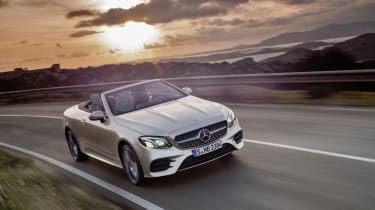 The 2017 Mercedes E-Class Cabriolet is now available to order, priced from £44,675. The all-new Cabriolet completes the E-Class range, joining its saloon, Estate and All-Terrain sisters, as well as the Coupe, with which it shares much of its structure, as well as its petrol and diesel engines and sophisticated infotainment system. The new Cabriolet also offers the choice of four-wheel drive – a first for a Mercedes convertible.

Large enough to allow four people “comfort and luxury in the open air”, the E-Class Cabriolet joins its smaller Mercedes C-Class Cabriolet stablemate to compete for sales against the Audi A5 Cabriolet and BMW 4 Series Convertible.

The E-Class Cabriolet shares its style with its Coupe counterpart, although its retractable soft-top roof has a less steeply sloping rear windscreen. A trademark diamond-style grille with prominent three-pointed star characterises the front end, while at the back there are horizontal light clusters. Intended to resemble the glow of a jet exhaust when illuminated, they also display a unique light-show on locking and unlocking. 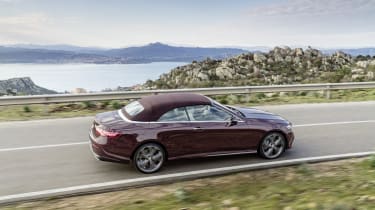 Depending on trim level, the windscreen surround is highlighted in polished or matte aluminium, a finish that also embellishes the door-tops and flows around the passenger compartment before crossing the the soft-top cover. The fabric roof has been derived from that of the S-Class Cabriolet and is said to have excellent sound insulation. Power-operated, it takes 20 seconds to fully open or close and you can do this at speeds of up to 31mph.

Like its saloon counterpart, the the E-Class Cabriolet is based on the Mercedes MRA chassis and is slightly larger overall than the outgoing model. As well as slight increases in length, width and height, its track – the distance between the left and right wheels – is greater. This, along with a stiffened floor and front end, is said to give the car greater stability and better handling than its predecessor. Like the E-Class Coupe, the Cabriolet is built from a weight-saving mixture of steel and aluminium and rides 15mm lower than the saloon. 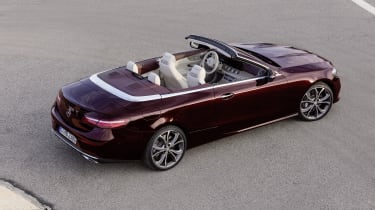 The Cabriolet’s interior architecture is shared with the E-Class Coupe, which means high-quality materials and touches like metal turbine-style air vents. It also incorporates the latest eye-catching infotainment technology that first impressed in the E-Class saloon. 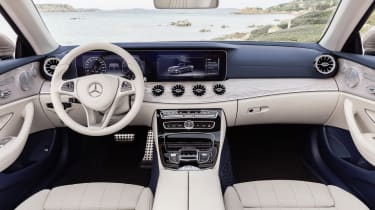 However, with its 12.3-inch display, the optional COMAND Online system is far more striking, especially if teamed with an optional second screen that takes the place of conventional instruments, offering a customisable choice of information displays.

COMAND Online incorporates Apple CarPlay and Android Auto compatibility. It also unlocks a number of Mercedes concierge services, including restaurant bookings and the option to have customised route recommendations transmitted directly to your car.

On-board systems are operated by touch-sensitive buttons in the steering wheel for ‘finger-swipe’ control, voice recognition or the traditional Mercedes rotary controller, which has an integrated touch pad for handwriting recognition. There are also direct-access buttons for the heating and climate control and to activate driver assistance systems. 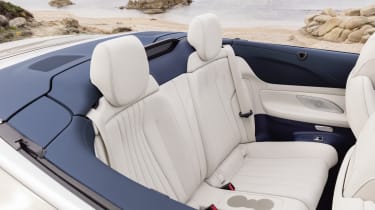 The Cabriolet is a full four-seater, with 100mm more rear legroom than the previous model. All four seats are heated, with the rear two divided by a centre console with cup-holders. Roof-down turbulence is said to have been all but eliminated thanks to AIRCAP – a system that uses powered windbreaks above the windscreen and behind the rear seats. The Mercedes AIRSCARF neck-level heating system is also on hand for those in the front.

Although a list of engine choices hasn’t yet been confirmed, it’s safe to expect the E-Class Coupe’s engines to be carried over. That would make the 191bhp E220d the only diesel option initially, alongside the 240bhp E300 four-cylinder and 328bhp E400 six-cylinder petrol engines. All models use a nine-speed automatic gearbox. 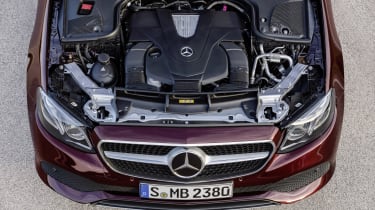 In due course, a Mercedes-AMG variant is set to be introduced, using the same 4.0-litre twin-turbocharged V8 petrol engine as the C63 AMG. The Cabriolet will also join the Coupe in being available with four-wheel drive.