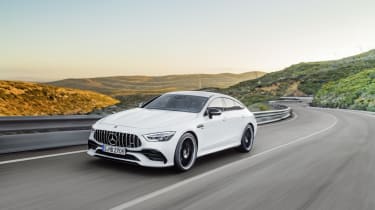 This is the new Mercedes-AMG GT 4-door Coupe, the latest offering from Mercedes’ high-performance and racing arm, AMG. Taking inspiration and technology from its two-door Mercedes-AMG GT sibling, the GT 4-door Coupe adds two doors and a choice of engines in a sleek four-door coupe body akin to that of the recently released Mercedes CLS.

The new car is offered in four versions (but not all are set for the UK): the GT 43, 53, 63 and 63 S. The GT 43 and 53 are powered by the same six-cylinder turbocharged petrol engine, which utilises a mild-hybrid system to boost power and efficiency, but they're not currently slated for the UK.

From the outside, the new car resembles the Mercedes CLS and is based on similar underpinnings, but the GT 4-door Coupe gets a host of bespoke parts and bodywork, plus tuned suspension and 4MATIC four wheel drive. Its swooping lines are resolutely sporty, with a rear end that reflects that of the original AMG GT model.

Inside, the Mercedes-AMG GT 4-door Coupe gets the usual mix of luxury and sporty styling enjoyed by other performance Mercedes models. It's a strict four-seater as standard, with a bench seat on the options list. 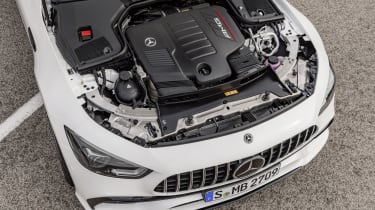 The entry-level GT 43 4MATIC+ comes with a turbocharged 3.0-litre six-cylinder petrol engine that uses mild-hybrid technology in the form of an electronic compressor to boost performance and economy. This comes with a nine-speed automatic gearbox and 4MATIC+ four-wheel drive. Power stands at 316bhp, which is enough for 0-62mph in 4.9 seconds. Fuel economy of up to 25.8mpg is claimed, while CO2 emissions range from 209-215g/km.

The step up to the GT 53 brings the same engine, gearbox and four-wheel-drive system but power climbs to 362bhp. Economy and CO2 emissions are unchanged, although the 0-62mph time drops to 4.5 seconds.

A 4.0-litre twin-turbocharged V8 petrol engine powers the GT 63 and GT 63 S models, with 577 and 630bhp respectively – enough for a 0-62mph in 3.4 seconds (63) or 3.2 seconds (63 S). Each uses a nine-speed fast-shifting automatic gearbox and 4MATIC+ four-wheel drive, although the 63 S gains an AMG Performance 4MATIC+ system with a built-in ‘drift’ mode for more advanced drivers.

As ever with Mercedes-AMG products, the GT 4-door Coupe comes with a range of selectable driving modes: Comfort, Sport, Sport+, Slippery and Individual, plus ‘RACE’ on the GT 63 S. Optional adaptive suspension also features. 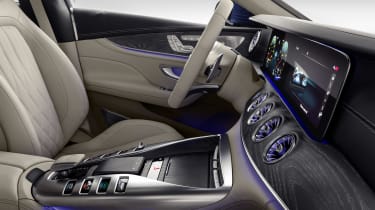 The Mercedes-AMG GT 4-door Coupe departs from the driver-focused interior treatment of the two-door models in favour of a more passenger-friendly format. The influence of saloons such as the Mercedes CLS and Mercedes S-Class can be seen in a dashboard that flows across the width of the car, with turbine-style air vents in polished metal set into attractive decorative trim. Wood and carbon-fibre designs are set to be offered and upholstery options include quilted cream leather.

The 4-door Coupe also boasts Mercedes' twin-12.3-inch display screens. The left one provides configurable driving information and the one on the right looks after infotainment, connectivity and convenience functions.

Multi-coloured mood lighting provides atmosphere, and the AMG theme is emphasised by a centre console with space for eight drive mode controls. There's also an 'S+' performance toggle switch on a racy, flat-bottomed steering wheel, among buttons that control the exhaust note and an array of chassis, engine and response settings.

The options list reflects the greater emphasis on passengers, with a £3,695 Rear Luxury Lounge pack bringing individual rear seats, separated by a centre console with a touchscreen display that can access the infotainment system, climate control, a tablet device holder, wireless phone charging and cup-holders designed to keep your drink warm or cool.