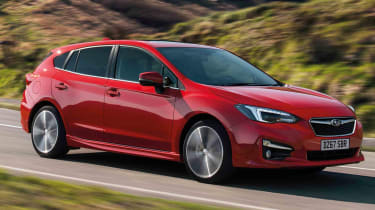 The 2018 Subaru Impreza will be available in UK showrooms from the end of November – and we've driven it before it goes on sale, priced from £23,995.

Despite being slightly larger than before, the Impreza maintains its existing position in the Subaru range, slotting in beneath the Subaru Levorg estate. Like that model, the Impreza has a four-wheel-drive system, with power controlled by a 'Lineartronic' CVT gearbox. Unlike the Levorg, though, you can choose a 2.0-litre engine as well as a smaller 1.6-litre.

The former produces 154bhp, providing a considerable increase in performance over the 112bhp 1.6-litre. Both use petrol, though, and fuel economy of 44.8mpg for the most fuel-efficient model put it at a disadvantage against mainstream hatchbacks like the Ford Focus and Volkswagen Golf. 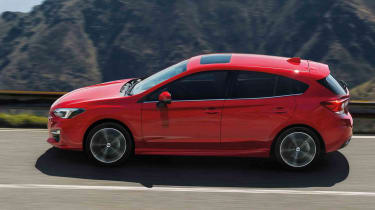 However, the Impreza strikes back with its impressive cornering grip and the promise of a surefooted drive on imperfect road surfaces and in adverse weather conditions. It also comes very well equipped, with a particular emphasis on advanced crash avoidance technology that includes Subaru's EyeSight system.

Subaru’s preference for boxer engines has delayed development of petrol-electric hybrid models, though, and company bosses admitted being late to the market with this technology – although it has designed the latest Impreza to take a hybrid system, which Subaru is currently developing.

The new Impreza comes as standard with EyeSight, a suite of safety systems. While some manufacturers charge extra for individual protective options, the EyeSight package includes active cruise control, autonomous emergency braking and lane-keeping assistance together. Subaru says its EyeSight package brought about a 61% reduction in accidents when figures were analysed in Japan.

Auto-dipping headlights that turn when you steer are also included and the new Impreza will come exclusively with Subaru’s Lineartronic CVT automatic gearbox, as the EyeSight system doesn’t work in conjunction with a manual gearbox. 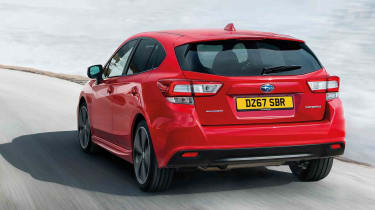 Impreza customers will be offered a choice of four trim levels, with a top-spec Limited model including a bigger touchscreen, keyless entry and go, climate control and a Harmon Kardon stereo.