“The Subaru Levorg is handsome, practical and refined, but its high purchase price and significant running costs mean it’ll be a niche choice at best” 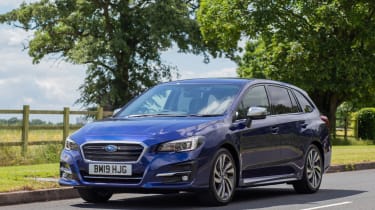 The Subaru Levorg is something of a rarity in the mid-size family estate class. Instead of using a diesel engine or a small, economical turbocharged petrol unit like many of the newest cars to arrive on the market, the Subaru uses a non-turbo 2.0-litre petrol engine and a CVT automatic gearbox attached to a standard four-wheel-drive system.

Buyers looking at Subaru’s rivals will be struck by the difference; the Volkswagen Golf Estate, Ford Focus Estate and Skoda Octavia Estate all come with a wide range of engines, a choice of gearboxes and a number of trim levels. Subaru would prefer the Levorg to be considered alongside compact executive estates like the Audi A4 Avant and BMW 3 Series but it can’t match them in terms of quality.

The absence of choice would be fine if the Levorg was cheap to buy, but it isn’t. It costs around £31,000, which is much more than many of its rivals. Even the well-equipped GT trim level doesn’t really justify the high price.

That’s undoubtedly an impressive list of kit but the car’s main failing lies with its engine. The Levorg was launched in the UK in 2015 with a 168bhp 1.6-litre petrol engine but the 2019 facelift saw that unit replaced by a 147bhp 2.0-litre without a turbocharger. Fuel economy improved slightly but the car can still only manage 32.6mpg on the latest WLTP combined cycle test with CO2 emissions of 167g/km. Performance, meanwhile, took a nosedive with the current Levorg taking 11.7 seconds to cover the 0-62mph sprint, whereas the old model could do it in 8.9.

The four-wheel-drive system on the Levorg is a big selling point but is also partly what makes the car less economical than rivals. There’s lots of extra grip for slippery conditions and, although the Levorg doesn’t have the same prowess as the older Subaru WRX and Impreza models in terms of handling, it does feel light on its feet and enjoyable to drive. 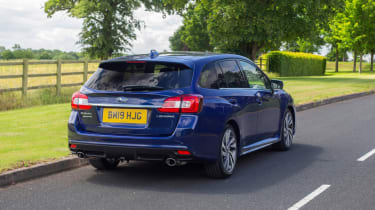 The Levorg is reasonably comfortable and relaxing to drive, helped by the smooth Lineartronic CVT (Continuously Variable Transmission) gearbox that is one of the better units of its type. The fact remains, however, that the twin-clutch automatics that tend to feature in rival models are superior, and Subaru’s use of the CVT is another factor in the Levorg’s disappointing fuel economy.

Subaru’s reputation for reliability is almost unrivalled, however, so if you do buy a Levorg, it’s unlikely to go wrong very often – if at all. Subaru finished sixth out of all the manufacturers in our 2019 Driver Power customer satisfaction survey and its dealers were ranked third in the same survey.

The Levorg received the full five stars when it was safety tested by Euro NCAP. As well as a multitude of airbags and the obligatory electronic traction and stability control systems, you get Subaru’s EyeSight package of active safety tech. A pair of cameras monitor the car’s surroundings and inform a series of systems that can help prevent an accident. 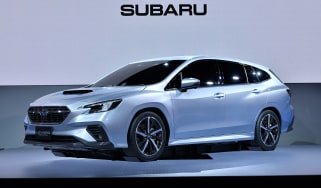