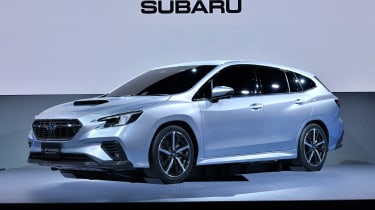 The new 2020 Subaru Levorg has broken cover at the Tokyo Motor Show. It features sharper styling and a new 1.8-litre petrol engine, plus plenty of safety technology. Set to go on sale in Japan in the middle of 2020, it’s due in Europe shortly afterwards.

Subaru presented the Levorg as a pre-production concept, but we’re assured that the final production version will look identical. The styling is similar to the current Subaru XV and Subaru Impreza, but bolder and more aggressive. Angular wheel arches, pointed LED headlights and a bonnet scoop are all included to make the Levorg stand out against it's more conservatively styled rivals.

The Levorg has always been a niche choice against rivals like the Hyundai i30 Tourer, Ford Focus Estate and Vauxhall Astra Sports Tourer, but this new model’s striking styling might win it a few more fans. It sits on the same platform as the XV and Impreza, although it’s unconfirmed whether the new Levorg is any bigger than the current model. 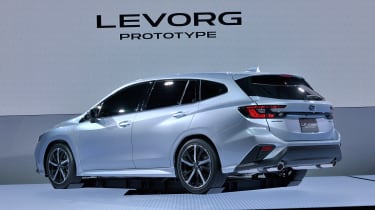 One thing against the current car is its thirsty petrol engine and frustrating CVT gearbox which cannot match the refinement and fuel economy offered by its rivals. While we don’t know whether it’ll use the same gearbox as before, a new 1.8-litre ‘Boxer’ engine will replace the old 2.0-litre engine. No specs have been revealed but Subaru says the engine uses lean-burn technology to help reduce fuel consumption. It could work in a similar way to Mazda’s Skyactiv-X petrol engine, which is more powerful than an equivalent diesel engine, but returns similar fuel economy with lower emissions.

Subaru will outfit the new Levorg with its latest-generation EyeSight safety kit as standard. It now includes four radars and a camera with a wider view. New driver assistance functions also feature including autonomous emergency braking, with the capability for the system to automatically contact the emergency services in the event of an accident.

More details about the Subaru Levorg’s interior are due to be revealed, but we know that the StarLink infotainment system will get a welcome upgrade. There’ll be a new, higher-res sat nav screen with more precise GPS tracking, and the system scans the road ahead automatically braking for corners when cruise control is enabled.

As the Levorg sells in such small numbers in the UK, we’re likely to only get one trim level (albeit a very well-equipped one) when the car arrives in showrooms next year.

Check out our guides to the best estates and the best automatic cars you can buy to see what the 2020 Subaru Levorg will be up against. 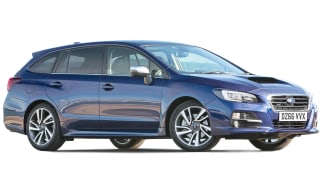