Offering affordable running costs, reasonable performance and a desirable image, models like the Volkswagen Golf Estate remain popular with buyers. We think the Mk8 is the most compelling version of the Golf so far, thanks to its improved interior space and more comfortable ride.

Measuring 67mm longer than the hatchback, VW’s rival to the Ford Focus Estate and Skoda Octavia Estate gets more legroom than the Golf hatchnback, along with 611 litres of boot space behind the rear seats. That can't quite match the boxy Skoda but beats the Ford by just over 20 litres. The space itself is a useful shape too - flat and with a low loading lip to slide heavy items over. 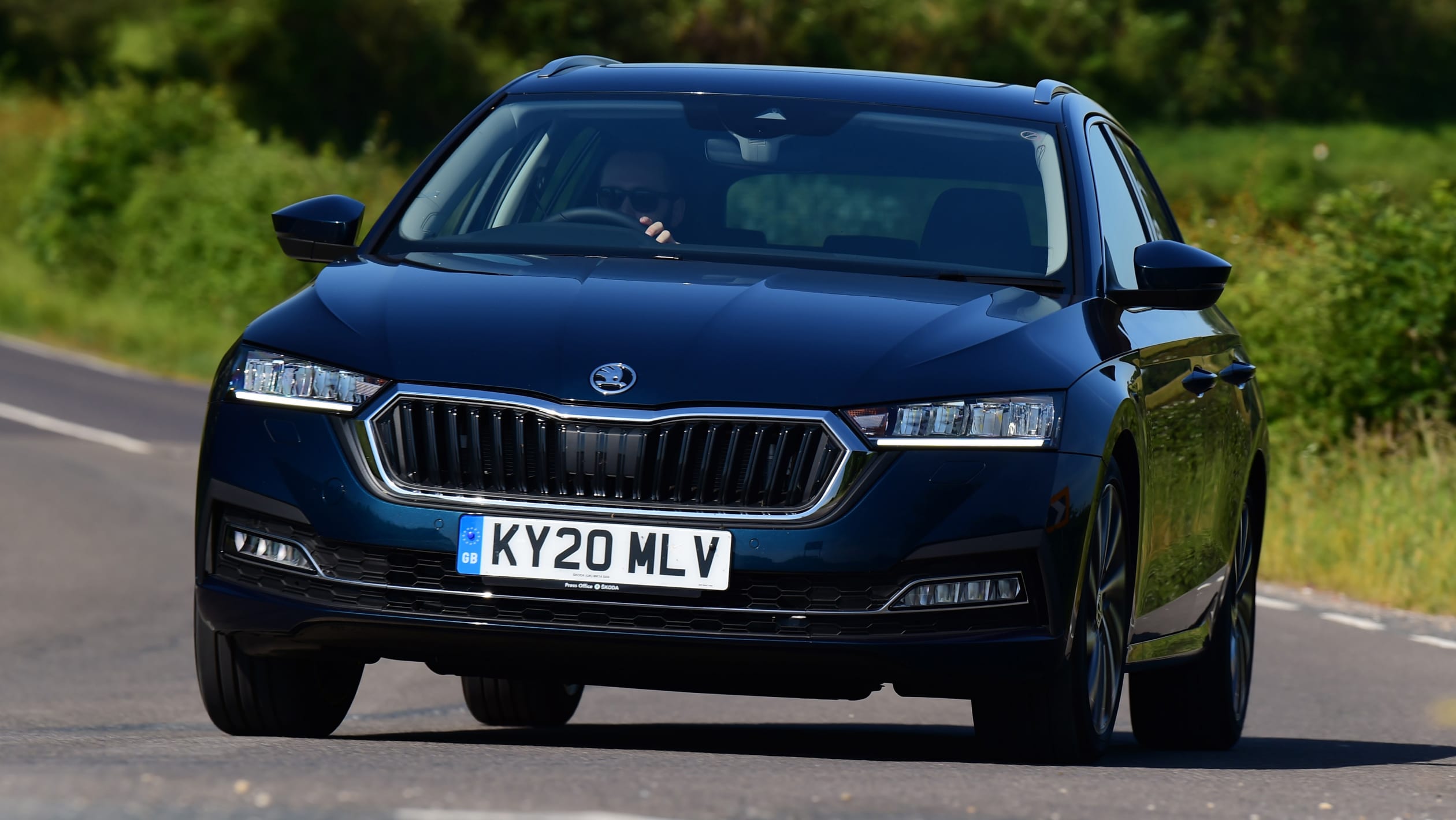 Engines include a 1.0-litre TSI or 1.5-litre TSI petrol, with mild-hybrid technology available on automatic versions to help boost efficiency. These can return around 50mpg, and we think the 1.5-litre is the sweet-spot in the range; it’s quiet, affordable and has enough pulling power for heavy loads. A brace of 2.0-litre diesel engines are also available, which suit high-mileage drivers and those planning on towing.

The interior looks smart and modern thanks to its digital dashboard, with displays for the instruments and infotainment setup, but some arrivals like touch-sensitive sliders for the volume control feel like a step backwards versus physical dials. Trims are Life, Style, R-Line and Alltrack, with the last two on the list offering either a sporty look or a more rugged theme respectively. Every version is fairly well equipped as standard, getting alloy wheels and even ambient interior lighting.

Handling is as assured as you'd expect for a car wearing the Golf badge, without quite matching the sense of precision you get in the Focus Estate. The 1.5-litre petrol will be just as smooth and accomplished as it is in the hatchback, while the 2.0-litre TDI with 113bhp has plenty of pulling power and a smooth six-speed manual gearbox.

More practical than ever, refined and comfortable for passengers, the latest Golf Estate shouldn't be overlooked. However, some of the frustrations of the new Golf hatchback’s interior remain, and the estate version still can't match the boot volume of the less expensive Skoda Octavia Estate.

Considering most petrol engines can hit 50mpg, diesel won't be necessary for most buyers

Petrol engines are expected to be popular in this generation of Golf Estate, and both the 1.0-litre TSI engine and 128bhp 1.5-litre TSI can just top 50mpg, with either a manual or DSG automatic gearbox. Even the 1.5-litre with 148bhp only just falls short, returning up to 49.7mpg with a six-speed manual. With mild-hybrid tech added - providing engine-off coasting and extended stop and start in traffic - the eTSI version also manages around 50mpg and emissions from 126g/km.

Volkswagen has also continued to develop its 2.0-litre TDI diesel engine, which now gets 'twin dosing' of AdBlue emissions-reducing fluid to make it as clean as possible. It can return up to 61.7mpg and emits 120g/km in the Estate. This could make it appealing for high-mileage drivers but considering the petrol can hit 50mpg, most won't find the greater expense worthwhile. It's very possible a plug-in hybrid version of the Golf Estate could arrive for the first time in its history. This technology gives the Golf GTE hatchback an EV range of up to 37 miles but it hasn't been confirmed for the standard estate yet.

Golf parts should be widely available and fairly reasonable, although Volkswagen servicing isn't necessarily the cheapest. Insurance groups are likely to stick close to the hatchback, starting from around group 14 and reaching the mid-twenties for 2.0-litre diesel versions.     4.5  Engines, drive & performance  The Volkswagen Golf Estate is reassuringly competent

It might be longer and slightly heavier than the hatchback but the Golf Estate feels similar from behind the wheel. Its steering conveys the same sense of assured body control and unflappable handling Golf owners have come to expect. It doesn't have quite the same level of feel as the Ford Focus Estate but for most buyers that's unlikely to be a big deal.

The 2.0-litre TDI diesel probably makes more sense here too because most Estate owners will be expected to lug heavy loads and are more likely to tow a trailer too. Even with just 113bhp, the diesel has plenty of power at low revs, and its 0-62mph acceleration time of 10.5 seconds is respectable. It has a six-speed manual gearbox with a positive shift action, and a seven-speed DSG automatic is also offered for around a £1,500 premium. Upgrade to the 148bhp diesel and the 0-62mph time drops to 9.1 seconds.

While it's available in Life trim, the 1.0-litre TSI petrol engine could struggle if you load up the Estate's boot. The 1.5-litre eTSI automatic with 128 or 148bhp is likely to be a better bet, and they both give the Estate a reasonable turn of speed, getting from 0-62mph in 9.4 and 8.7 seconds respectively.

The Mk8 Golf's interior has been praised and criticised; it has much of the latest technology but some of it isn’t as easy to use as you’d hope. Those characteristics are carried over to the Estate, as is a mix of materials that's less convincing than in older models. Hard plastics seem to have crept in, and some of the neat design touches that helped separate the Golf from rivals are absent.

A longer wheelbase has improved the Golf's ride quality slightly, however, and the interior feels spacious. There's also lots of adjustment for both the driver's seat and steering wheel, making it possible for almost anyone to get comfortable enough for a lengthy drive.

To earn its stripes, the Golf Estate has to be able to carry more than a similarly priced SUV, as well as being refined and easy to live with. To this end, the Estate is 67mm longer than a Golf hatchback, not only giving it a bigger boot, but also freeing up an additional 38mm of legroom for passengers.

The boot measures 611 litres with the rear seats in position, making it six litres bigger than the outgoing car. Lower the seats and there's now 1,642 litres of cargo room - a more impressive 22-litre improvement. It's a flat load space too, making it easy to slide heavy or bulky objects inside without them getting snagged. This puts it ahead of the Ford Focus Estate but it still can't quite match the Skoda Octavia Estate, which is 30 litres bigger with the seats in place.

It might be called the Mk8 Golf, but in reality this is still an evolution from the Mk7, so we don't expect reliability to change too drastically. Safety should also be improved, thanks to the latest technology innovations.

The Mk7 Golf came 50th out of the top 75 cars in our 2020 Driver Power survey, which isn't a bad showing, but owners did report that electrical glitches are fairly common. That's a worry considering the Mk8 Golf has embraced more electronic tech than ever before. Hopefully with the introduction of over-the-air software updates, more issues will be remedied without having to visit a dealership.

While it's unlikely the Golf Estate itself will be crash-tested, the Golf hatch has already been awarded a five-star result by Euro NCAP. It has a plethora of equipment to help avoid collisions, as well as keeping occupants safe should the worst happen. Features include lane keeping assist and Car2X communications that can share data with other vehicles in the area and warn of hazards on the route.

If you have lots of things to transport, but don't want a large SUV with expensive running costs, a small estate could be the answer. They are stylish…
2020 Volkswagen Golf Estate: prices, specs and release date
Volkswagen Golf

Our first look at the new VW Golf Estate suggests it’ll be even more practical than the current car
Volkswagen Golf Match 2018: prices, specification and on sale date
Volkswagen Golf

The new Volkswagen Golf Estate will cost from £17,915, available from 2 July