Volkswagen has released details of the new Volkswagen Golf Alltrack, a crossover of estate and SUV that will make its debut at the Paris Motor Show next month.

The Golf Alltrack is designed to offer buyers a blend of Golf style with some offroad ability, so the car has permanent four-wheel drive, increased ground clearance and bodywork more suited to ‘light off-road terrain’.

VW will offer three diesel options for the car, plus a 178bhp 1.8-litre turbocharged petrol engine that is new to the Golf range.

The petrol engine promises plenty of power at low revs for offroad situations and towing, and will come with a six-speed automatic DSG gearbox. A 0-62mph time of 7.8 seconds is very respectable, while economy stands at 41.5mpg with CO2 emissions of 158g/km for tax of £180 per year.

The entry-level engine will be a 109bhp 1.6-litre turbo diesel, which will offer the best running costs of all Alltrack models thanks to figures of 60.1mpg and 124g/km of CO2 emissions. It is capable of 0-62mph in 12.1 seconds and a top speed of 116mph.

The mid-range diesel option will be the 148bhp 2.0-litre engine, offering a significant performance improvement over the 1.6 without huge sacrifices in economy.

The most powerful Alltrack will be the 182bhp 2.0-litre diesel model. It will match the petrol model’s 0-62mph time of 7.8 seconds and come fitted with the same DSG automatic gearbox as standard. Not only will it deliver good speed but the engine’s power will make the Alltrack capable of towing loads of up to 2,000kg (braked on 12% incline).

Volkswagen’s 4MOTION four-wheel drive system is standard on every Golf Alltrack model but is able to transfer most of the engine’s power to the front wheels in certain scenarios to improve fuel consumption.

Aside from the car sitting higher on the road, changes to the appearance of the standard Golf estate include black wheel arch mouldings, 17-inch alloy wheels, Alltrack badging and other protective bodywork.

The interior of the Alltrack features a leather-trimmed steering wheel and gear lever, and custom seat covers, while standard equipment includes automatic climate control, a ‘Composition Touch’ infotainment system and cruise control. Chrome touches and Alltrack badging in the cabin also set the car apart from other Golf models.

The Golf Alltrack is expected to go on sale in summer 2015, with prices to be announced.

For reviews of the Golf estate and the larger Passat Alltrack, head over to Carbuyer’s dedicated Volkswagen page. 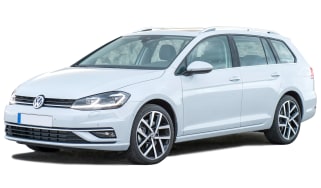 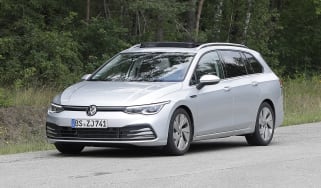