“It’ll be a niche choice, but as a classy, comfortably and high-quality family estate with a bit of off-road ability, the Volkswagen Passat Alltrack makes sense” 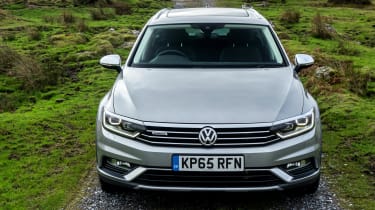 If you’re after a large family estate with the added security of four-wheel drive and some extra towing ability, then the Volkswagen Passat Alltrack could well be for you. It’s a bit tougher than the regular estate, with some off-roading addenda such as black plastic cladding and skid plates at the front and back, but the understated style of the regular Passat Estate remains.

There are only two diesels to choose from – managing 148 and 187bhp respectively. The less powerful version is only available with a six-speed manual gearbox and the more powerful comes with Volkswagen’s six-speed dual-clutch automatic as the only option. Both are four-wheel-drive only, however, meaning extra grip and security as well as more pulling power for towing. Alltrack models aren’t quite as fuel efficient as their lower two-wheel-drive siblings, however, thanks to the extra weight of four-wheel drive.

The Alltrack offers a very quiet, calm and relaxing driving experience, however, and this is reflected in the wonderfully elegant and high-quality interior. If anything, the Alltrack’s biggest rival sits within VW’s own stable, with a four-wheel-drive Skoda Superb estate offering more space and more equipment for less money than the VW. That said, the Passat will likely hold onto more of its value when the time comes to sell or trade in.

The Volkswagen Passat range finished 32nd out of the 75 cars ranked in our 2017 Driver Power owner satisfaction survey of cars currently on sale in the UK.

Any four-wheel-drive system adds weight and reduces a car’s economy, so it’s no surprise that the Passat Alltrack uses more fuel than it’s two-wheel-drive stablemates. Volkswagen has made improvements to economy and CO2 emissions with its latest update to the Alltrack though: the 148bhp 2.0-litre TDI engine claims 130g/km CO2 emissions and returns 57.6mpg, while the more powerful automatic model isn't much worse, producing 137g/km of CO2 while returning 54.3mpg. These figures will incur annual road tax bills of £110 or £130, respectively.

Swift progress in a safe car that is pleasant to drive

The Passat Alltrack can only be bought with a diesel engine, offered in two states of tune. Both the 148 or 187bhp versions of a 2.0-litre diesel engine offer plenty of pulling power, meaning the Alltrack is a capable tow car, and feels no slouch, whichever engine you choose. Do note that which engine you choose affects which gearbox the Alltrack comes with: opt for the lower-powered unit and you get a manual, while the more powerful variant is fitted with an automatic gearbox only.

The more powerful engine makes the Alltrack positively brisk with a 0-62mph time of eight seconds, while the less powerful model reaches 62mph in a respectable 9.2 seconds. Those choosing the 187bhp Passat Alltrack should find progress smooth and refined as the extra power, paired with the six-speed automatic gearbox, makes for relaxing progress.

As you’d expect, the Passat Alltrack shares most of its mechanical bits with the standard Passat which is an appealing place to start. The Alltrack’s raised suspension means it rides 33mm higher than the standard car, so it’s slightly more comfortable. It’s not quite as much fun in corners, but you’d have drive both cars back-to-back to tell them apart. The Passat Alltrack’s four-wheel-drive system makes it good off-road, although it doesn’t quite have the ground clearance of a regular SUV.

Unless an automatic gearbox is essential for you, we’d recommend the less powerful 148bhp model as it has more than enough power to propel the Passat Alltrack smoothly, yet is also cheaper to buy, run and tax than the 187bhp version.

Pliant suspension and a comfortable cabin

The Passat Alltrack cabin is a refined car to sit in. It will be familiar to regular Passat drivers, the only difference being seats embroidered with the Alltrack logo. The cabin is well insulated for sound making for a quiet ride, and the pliant suspension mean the Alltrack dispenses with potholes and poor road surfaces with ease, and is an appealing prospect on a long drive. Engine noise is barely audible, unless one is accelerating hard. The optional Dynamic Chassis Control (DCC) system allows drivers to opt for Sport, Comfort or Normal settings; these equate to stiff, soft or normal suspension. The Passat Alltrack feels spacious and airy inside, with plenty of room in the boot and rear seats as well.

A very capable and spacious car

With the rear seats up the Passat Alltrack boasts 639 litres of bootspace; fold those seats down and this grows to a cavernous 1,769 litres, making the Passat Alltrack roomier than all its key rivals. The Alltrack is also a strong contender if you are going to be towing regularly. Its 2200kg tow limit is up 200kg on the standard Passat, making this an extremely capable car when it comes to hauling loads. We’re pleased to see Volkswagen fits a full-sized spare wheel to the Alltrack as standard.

Proven engines and mechanicals, together with a host of safety systems

The Passat Alltrack shares most of its mechanicals with the standard Passat, meaning it is based on a sound, reliable platform. Volkswagen has toughened up the Alltrack with enlarged bumpers, wheel-arch protectors and side sill covers, meaning the car should avoid scratches and scrapes should you take the Alltrack off road. Volkswagen offers plenty of electronic safety systems, such as Emergency Assist autonomous braking and Rear Traffic Assist to aid reversing manoeuvres, as well as a system that will alert you if you try to change lanes without indicating.

The Passat range was rated above average for reliability in our 2017 Driver Power owner satisfaction survey of cars currently on sale in the UK. Of the owners who responded, 12% reported experiencing a problem with their car at least once.

The VW Passat Alltrack pitches itself squarely between the premium Audi A4 Allroad and the Skoda Yeti SUV in terms of price. While the Volkswagen offers a similar driving experience to the Audi, it is significantly cheaper. The Skoda Yeti is better value that the Passat Alltrack in almost every respect, although the Passat offers more space and a more car-like driving experience.

Standard kit on the Passat is decent, if not overwhelming. All models alloy wheels, front and rear parking sensors, wheelarch and sill protectors, together with chunky bumpers. Inside there’s a digital radio, Alltrack-branded seats, Bluetooth and a colour touchscreen. The Passat Alltrack can only be ordered with four-wheel-drive, making this a car pitched firmly at those who want a rugged-looking car, together with true off-road capability.