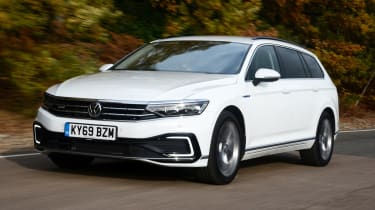 Plug-in hybrids (PHEVs) are becoming more widely available but the Volkswagen Passat GTE Estate has been around longer than most, first arriving in UK showrooms in 2015. The Passat range was updated in 2019 with refreshed styling and interior upgrades, and the GTE saloon and estate were given a bigger battery at the same time to improve their electric range.

VW claims the GTE estate can manage up to 35 miles of electric-only driving, and you should be able to get close to this in the right conditions. As long as there’s enough charge in the battery the car will always start in electric mode, and most commutes can be completed without using any petrol. The majority of buyers are likely to be business users because of the GTE’s low Benefit-in-Kind rating.

While Volkswagen’s GT-badged models are often a little sportier than the rest of the range, the Passat GTE Estate isn’t really aimed at keen drivers. Instead, it offers a smooth, refined drive just like the rest of the Passat range, and the transition between electric and petrol power is almost imperceptible. The car runs on petrol power most of the time above 40mph.

Inside, you get plenty of equipment to offset the car’s fairly high price tag. Three-zone climate control, sat nav with online services, heated front seats and smartphone mirroring are among the gadgets fitted as standard, while the GTE Advance adds a few extras like a bigger touchscreen and an electric tailgate. The Passat GTE is essentially a standalone model, whereas some rivals, such as the Skoda Superb, are available with the hybrid powertrain in most trim levels. 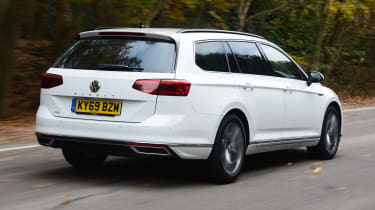 Few plug-in hybrid cars manage to package the batteries and motors without sacrificing practicality, and you’ll have to make do with a slightly smaller boot in the Passat GTE Estate compared to petrol and diesel models. It’s still a pretty spacious car, though, and adults won’t feel cramped in the back seats.

Plug-in hybrids like the Volkswagen Passat GTE offer great economy on paper (VW quotes 201.8mpg) but this wholly depends on how much you drive on electric power and the type of journeys you make. Doing mainly short, urban journeys and using battery power as much as possible will give high MPG figures, but on main roads and motorways the petrol engine will be doing nearly all the work. At higher speeds, the fuel economy figure is likely to drop to somewhere in the mid-30s as a result. 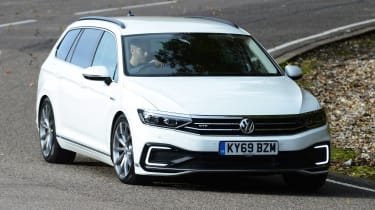 We managed close to VW’s claimed 35-mile electric range in our test, and recharging the battery takes a relatively quick five hours from a standard socket. Plugging in at a wallbox reduces this to 3.5 hours.

With combined CO2 emissions of just 31-38g/km, the Passat GTE attracts a low 10% Benefit-in-Kind (BiK) tax rate for company-car drivers; a considerable saving compared to the 32% tax rate of the cheapest diesel model. Private buyers pay £140 in VED (road tax), but speccing the car to over £40,000 sees the tax rise to £465 for the first five times you renew the tax. VW offers a three-year, 60,000-mile warranty, and servicing plans are available.

The Passat GTE is programmed to start in whisper-quiet electric mode, and will continue to favour electric power until you change the driving mode or accelerate hard. In most situations, the switch from one power source to the other is barely noticeable, and really that’s in keeping with the whole driving experience. Despite its sporty-sounding badge, the GTE is a car that majors on quietness and comfort. It feels as composed as you’d expect but the steering is precise and handling is pretty decent. We’d appreciate a little more steering feel, though. 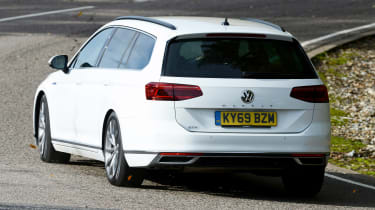 Just like many plug-in hybrids, the GTE combines a petrol engine with an electric motor and a battery. In this case, it’s a 1.4-litre petrol engine and a 13kWh battery pack, which together produce 215bhp. Zero-to-62mph takes a brisk 7.6 seconds, and the top speed is 138mph (although you’re limited to 84mph on battery power alone). It’s the same setup you’ll find in the Skoda Superb iV, while the upcoming Cupra Leon will be mechanically similar but slightly more powerful.

There’s an upmarket feel inside the Volkswagen Passat GTE Estate

Besides some new trim and the removal of the Passat’s dash-mounted analogue clock, little changed inside when the Passat range was facelifted. While the dashboard is far from the last word in eye-catching design, it feels modern and arguably a little more upmarket than some of its rivals. The GTE gets an eight-inch touchscreen with sat nav, while the GTE Advance gets an even larger screen and a Active Info Display digital instrument cluster. 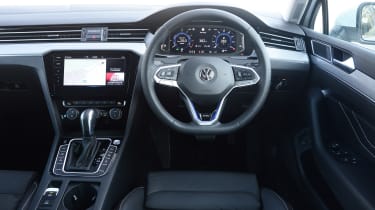 Because the GTE is based on the SEL spec, you get a good list of equipment, which helps to justify the car’s high price. Besides LED headlights, three-zone climate control and Apple CarPlay, you can download a smartphone app from which the cabin temperature can be preset and the car can be locked remotely. You can also schedule when the charger starts working, to take advantage of cheaper electricity tariffs. GTE Advance models also come with upgraded LED headlights, keyless entry, a powered hands-free tailgate and bigger alloy wheels. Options include a panoramic sunroof (£995) and a reversing camera (£335).

The back seats of a Passat Estate are very spacious and both head and legroom is more generous than in the previous model. Those in the front enjoy VW’s ‘ergoComfort’ seats, and most drivers should be able to find their ideal driving position. The glovebox is a good size, and so are the door bins. 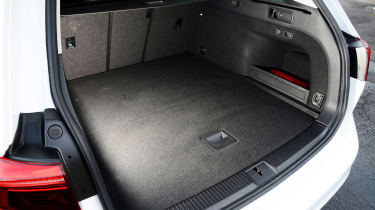 Because of where the battery packs are placed, the GTE does lose a noticeable amount of boot space compared to petrol and diesel models. Instead of 650 litres, you get 483 litres with the rear seats in place; the large reduction in boot space is a little disappointing (the Volvo V60 hybrid doesn’t lose any boot space to non-hybrid versions) but the GTE’s boot is still a good size; it’s within touching distance of what you get in a BMW 3 Series Touring or a Mazda6 Tourer. The GTE is one of the only models not to get self-levelling suspension, either, so it can’t cope with quite as heavy loads.

The towing capacity is less than the rest of the range, too, but many hybrids can’t tow at all. VW charges £930 for a swivelling towbar and an extra £530 to add Trailer Assist and auto parking. 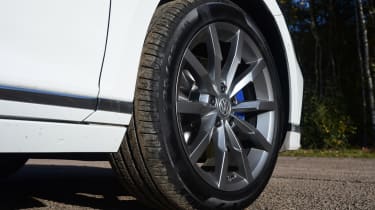 Volkswagen has slipped down our Driver Power owner satisfaction rankings in recent years; it finished 19th out of 30 manufacturers in 2020, which is down two places on the previous year. Buyers liked the brand’s infotainment systems and interior space, but servicing costs and driving experience weren’t looked upon so favourably. A fifth of owners reported faults. While it didn’t feature in our 2020 list, the Passat finished 54th out of the top 100 models ranked in 2019’s survey.

The Passat range gets a reassuring five-star safety rating from Euro NCAP, and all cars get a good range of safety equipment such as adaptive cruise control, post-collision braking, pre-crash protection, lane-keeping assistance and a driver fatigue monitor. All-round parking sensors are standard, as are hill-hold assist and auto headlights. The GTE also has a sound generator that works when the car is running on electric power to alert cyclists and pedestrians to its presence. 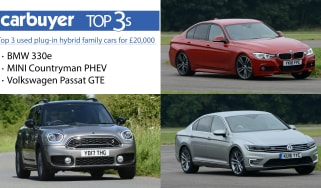 “Dear Carbuyer, I’ve got £20,000 to spend on a family car, and I want a plug-in hybrid. What would you recommend?”
Skip to ContentSkip to Footer