If the 503bhp Quadrifoglio is too pricey and the rest of the Giulia range too tame, the 276bhp Veloce could be for you 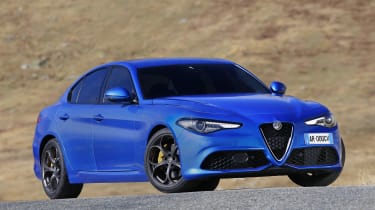 We already knew about the Alfa Romeo Giulia Veloce – Alfa announced it at the 2016 Paris Motor Show – but it’s now been confirmed as coming to the UK and is available to order.

The Giulia Veloce may be something of a ‘Goldilocks’ car, with just the right amount of performance at just the right price. At £37,935, you couldn’t call it affordable, but it’s £23,000 cheaper than the Giulia Quadrifoglio super saloon and 79bhp more powerful than the next-fastest car in the range. 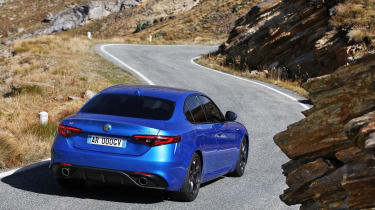 The Veloce’s 276bhp comes from a reworked version of Alfa’s four-cylinder 2.0-litre turbocharged petrol engine, which powers it from 0-62mph in 5.7 seconds. This is only a second faster than a Giulia with the 197bhp engine, but mid-range motorway acceleration should be impressive.

The Giulia Veloce gets its own eponymous trim level, with enlarged air inlets, gloss-black window surrounds, a reworked back bumper and a rear air diffuser for improved aerodynamics. Inside, the Veloce’s sports seats are clad in perforated leather, while aluminium gearchange paddles are mounted on the steering column and aluminium trim inserts bedeck the doors, dashboard and instrument panel. 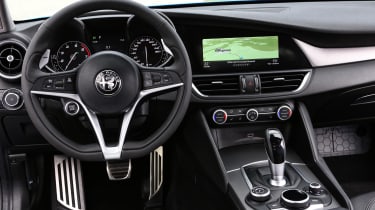 It’s a shame Alfa decided against fitting the Veloce with the £1,950 performance pack as standard, though, as this includes adjustable suspension and a limited-slip differential. These improve the Giulia’s handling and grip respectively and are in-line with the model’s sporting ethos.

Fuel economy is almost unchanged from the 197bhp petrol Giulia, at 46.3mpg, and the Veloce’s CO2 emissions of 141g/km mean company-car drivers will be liable for a 25% Benefit-in-Kind rate. This is 1% higher than that of the 197bhp petrol engine, but is unlikely to be an insurmountable hiccup.

Rivals? Well, the BMW 340i is about £1,500 more expensive than the Giulia Veloce, although its 3.0-litre six-cylinder engine is 45bhp more powerful and it’s half a second quicker in the 0-62mph dash. 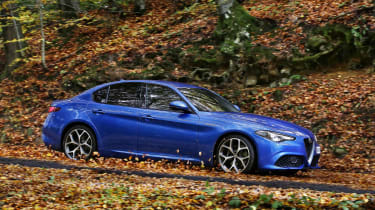 The four-wheel-drive Audi S4 also springs to mind, but at almost £45,000 and with 349bhp, this is clearly a faster and more expensive car. There’s also the Jaguar XE, which is available with a four-cylinder 2.0-litre turbocharged petrol engine for around £32,000. This only produces 246bhp, though, meaning it’s down on power as well as price compared to the Veloce.