"For discreet, luxurious and swift motoring, the Audi S4 takes some beating" 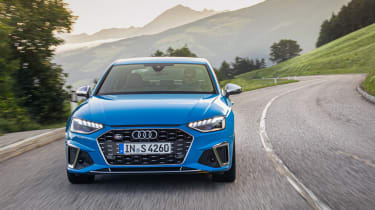 The Audi S4 is a high-performance version of the Audi A4 saloon, and costs about £18,000 more than the cheapest model in the A4 range. That fairly substantial premium gets you a turbocharged 3.0-litre diesel engine producing 342bhp, as well as four-wheel drive, a generous amount of standard equipment and some subtle styling enhancements. An S4 Avant estate model is also offered, for a further £1,500 or so.

The S4 competes with the BMW 3 Series and the Mercedes-AMG C-Class C43, which are roughly the same price but use petrol engines instead of diesel.

Fitted with an electric compressor to reduce turbo lag, the S4 has a different feel to its petrol rivals but is no less potent, leaping forwards when you press the accelerator and overtaking slower traffic with ease. It can get from 0-62mph in 4.8 seconds and has an electronically limited top speed of 155mph but can still return just under 40mpg.

A facelift during 2019 sharpened up the car’s appearance, while its plush interior remained virtually unchanged, except for updates to the infotainment system and improved graphics for the Virtual Cockpit digital instruments.

Considering the performance on offer, the Audi S4 is reasonably cheap to run

The latest Audi A4 is one of the most economy-focused performance saloons on sale, with loads of technology designed to save fuel as well as boost performance. An advanced diesel engine is bolstered by Audi's 48-volt mild-hybrid system, allowing engine-off coasting and longer periods of stop-start in traffic. 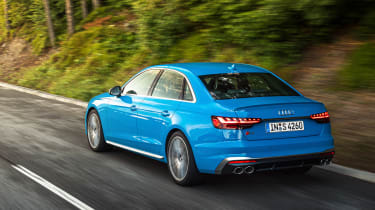 Official figures stand at 37.3mpg and 164g/km of CO2 emissions, so drivers will be able to take long trips without having to worry about frequent fill-ups. The efficiency figures also make the diesel S4 quite a bit more economical than petrol rivals like the Mercedes-AMG C43 4MATIC, which can manage up to 29.4mpg (213g/km).

The S4 sits in the top company-car tax band and costs £145 a year to tax but with a luxury car surcharge of £320 in the first five renewal years because it costs more than £40,000 to buy.

The S4 is impressively quick, and easy to drive

The S4 we drove recently left us in no doubt Audi has made a genuinely rapid and capable car. Its adjustable suspension can be configured to iron out potholes effectively or provide extra stiffness for an involving drive, while the conventional eight-speed automatic gearbox is arguably smoother than Audi’s dual-clutch S tronic set-up, even if it’s not quite as quick to change gear. Using the steering wheel shift paddles for the gearbox provokes a pleasing blip from the engine when shifting down a gear, while changes in auto mode are seamless. 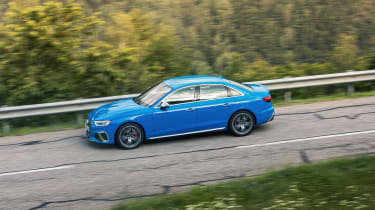 The 3.0-litre six-cylinder diesel engine uses turbocharging and an electric compressor at low revs to help produce its 342bhp. It’s responsive for a diesel and the S4 accelerates rapidly enough to pin you to the back of the seat with some force. The car surges forwards when you press the accelerator, and even makes a satisfying deep bellowing noise, getting from 0-62mph in 4.8 seconds.

The S4’s steering leaves a little to be desired. It’s accurate enough and to make it easy to place the car on the road, but we wish there were a little more feel through the steering wheel, as the lack of feedback makes it tricky to gauge how much grip the front wheels have and how slippery the road is. In truth, this is only a problem that presents itself on winding B-roads, but the fact remains that if driver involvement is a top priority, BMW’s 3 Series is the better car.

The S4 has a beautiful interior and very comfortable seats

Audi enjoys an enviable reputation when it comes to interior design, and getting into the S4 leaves you in no doubt this is justified. The quality of materials on show is impressive, while the overall design is ergonomically sound and aesthetically pleasing, though it’s a shame the infotainment screen doesn’t no longer retracts into the dashboard. 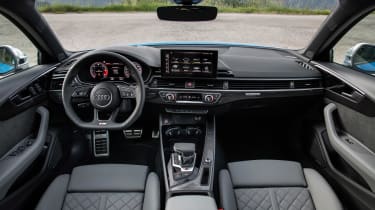 All S4s get incredibly comfortable, supportive Napa leather seats, which are heated and have a massaging function in the front. Rear seat passengers get their own controls for the air-conditioning, and the adjustable suspension can be configured to provide a cosseting and comfortable experience over poor road surfaces.

Few cars as fast as the S4 are as practical

The whole point of high-performance models like the Audi S4 is that they offer the practicality of the car on which they’re based, together with serious speed. As such, the S4 is just as practical as the A4 saloon. There’s plenty of space for adult passengers in the rear, while the 480-litre boot is identical in size to the BMW 3 Series’. Choose the Avant model and you get a more practical estate boot which can hold 505 litres. 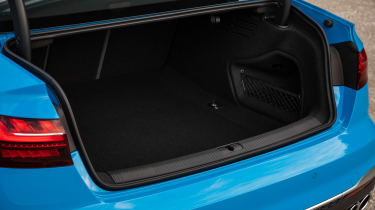 As a niche model, the S4 lies outside the remit of Euro NCAP’s safety tests but it doesn’t really need its own assessment because the standard A4 saloon has already been checked. This scored the full five stars, with excellent scores for adult and child protection (90% and 87% respectively). 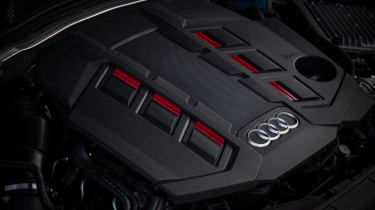 All S4s come with an ‘active’ bonnet that rises to shield pedestrians from the hard engine components lying beneath, plus an autonomous emergency braking system that’s effective at urban speeds. Mandatory systems such as ISOFIX child seat mounts and electronic stability control are all present and correct, as you would expect.

The standard Audi A4 was rated poorly for reliability in our 2019 Driver Power owner satisfaction survey of cars currently on sale in the UK. Of the owners who responded, 21.9% reported experiencing a problem with their car at least once, with electrical issues the most common.