The Kia Stonic will start at £16,295, making it pricier than a Juke - but it’s better equipped 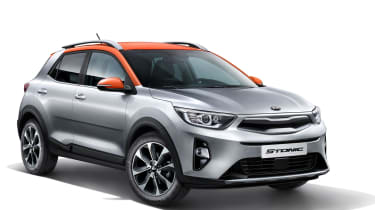 The Kia Stonic has been priced at £16,295, meaning it costs exactly the same as a Peugeot 2008 but almost £1,500 more than a Nissan Juke crossover. Order books are open now, with the first cars arriving on 23 October.

The entry-level Stonic is a 1.4-litre petrol in 2 trim, with the price rising to £20,495 if you choose the range-topping 1.6-litre CRDi diesel First Edition model.

Customers can choose the 2 trim with all three engines available in the Stonic. It comes well equipped, too, with 17-inch alloy wheels, air-conditioning, roof rails, rear parking sensors, Bluetooth and LED daytime running lights, along with Apple CarPlay and Android Auto.

The Stonic First Edition doesn't get the 1.4-litre petrol engine; instead, it's fitted with a more powerful 1.0-litre T-GDi petrol or the aforementioned diesel. It stands out thanks to two-tone paintwork and gets desirable features like TomTom navigation as well as additional safety kit.

Kia is quite pragmatic about the Stonic: while some cars are driven by passion, the Stonic owes its existence to economics: so-called 'B-segment' SUVs currently account for 7% of the market and sales are expected to surge over the next three years. 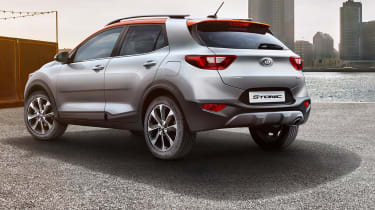 And while the Stonic’s sister car, the Hyundai Kona, has a distinctive, multifaceted front end, the Stonic is more conventional, featuring the same ‘Tiger Nose’ grille seen on many other modern Kias. These aspects, together with Kia’s class-leading seven-year warranty, should mean you’ll see a fair few Stonics around when it arrives in the UK in October.

The Stonic still has visual character, though: so-called ‘floating’ roofs are all the rage these days, and creating one of these involves visually separating the roof from the car’s body using gloss-black materials on the rearmost pillar. 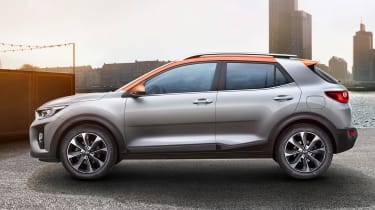 Kia has gone the other way with the Stonic, emphasising rather than minimising the roof’s connection to the rest of the car, by creating what it refers to as a ‘targa’-style roof. That roof will be available in black, lime green, red or orange, depending on which body colour you pick, allowing for 20 different colour combinations of roof and body.

The 1.4-litre petrol engine produces 98bhp, but the 118bhp three-cylinder turbo petrol offered in the First Edition is likely to be a better choice, thanks to its more modern nature. The 1.6-litre diesel engine is carried over from the larger Kia Cee'd and makes 108bhp.

The Stonic won’t win any prizes for a revolutionary dashboard layout, but it looks sensible, comfortable and modern enough in there. All models come with Apple CarPlay and Android Auto as standard, while the seven-inch touchscreen is enhanced with connected services and TomTom navigation in the First Edition. 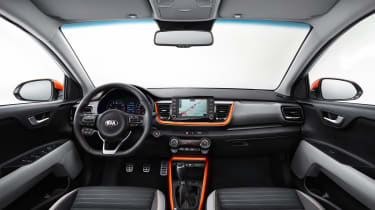 First Edition is the range-topper, with keyless entry, cloth and leather upholstery with colourful accents, climate control, LED rear lights, tinted windows, heated front seats and a flat-bottomed steering wheel. It also comes with autonomous emergency braking and lane-departure warning as standard – they're optional on the 2.

Kia will also offer a number of colour packs, with many buyers expected to specify their Stonic's interior trim colour to match its roof. As this is an SUV crossover, the driver and passengers sit relatively upright, which should mean the Stonic offers decent legroom. Boot space is quoted at 352 litres, which is roughly 15% less than the Peugeot 2008 offers, but almost 25% down on the Renault Captur. The Stonic has a dual-height boot floor and also offers more luggage space than the Kia Rio hatchback. 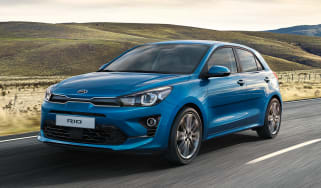