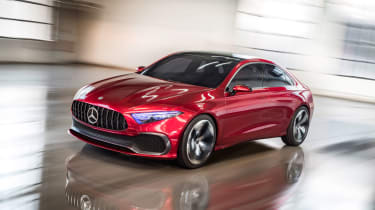 Mercedes has signalled its intent to grow its small-car range with the Mercedes-Benz Concept A Sedan. It provides “an outlook of the next generation of compact vehicles and a potential, new body type”.

The new saloon model is expected to form part of the next-generation Mercedes A-Class range, due in 2018, and is likely to be sold alongside the Mercedes CLA four-door coupe and Mercedes GLA SUV.

The Concept A Sedan has been designed with the Asian and American markets in mind, but sources at Mercedes have suggested the car will also be sold in the UK.

Although the Concept A Sedan’s bodystyle is close to the CLA, it will be a more conventional ‘three-box’ saloon, rather than the four-door coupe CLA. Mercedes’ bosses say the market for a traditional saloon is far larger than that of the swoopy CLA. 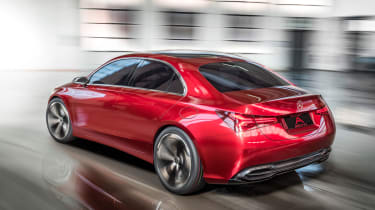 The Mercedes Concept A Sedan showcases a more curvy future for Mercedes models too. Design boss Gorden Wagener said: "Our Concept A Sedan shows that the time of creases is over ... and has the potential to introduce a new design era." That era looks set to include new surface detailing on the bonnet and slim LED headlights.

At 4,570mm long, the Concept A Sedan is fractionally shorter than the CLA but it’s also wider and taller. The concept has 20in alloy wheels and retractable door handles. While the wheels are likely to make it on to the production model, the door handles will belong to the concept car.

Wagener told Carbuyer’s sister title Auto Express, “The next generation of our small cars, we can build from scratch. The proportions will be familiar - it will still be an A-Class - but we just made it so much better.

The car, even though it’s front-wheel drive, has our typical rear-wheel-drive proportions. We can put bigger wheels on the platform, too; we managed to negotiate that with the engineering side. But the next generation will look even sportier, in a very clean style.

“It will have more functionality inside, too. The aperture to get in and out is improved, rear headroom is improved and you get a bigger boot as well, because the rear overhang is longer - not that you see that, because we’ve camouflaged it nicely.”

“The CLA is a big brand-shaper; we’re seeing 80% of buyers of that car in the US being new customers to Mercedes, which is terrific. It helped a lot to renew the company. But it’s still a four-door coupe so if you want to go into even bigger volume then you need to go for a more conventional three-box sedan, especially for Asia and the US.” 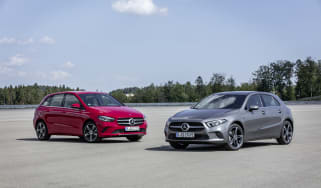