The off-road focused Jeep Wrangler is now available with petrol or diesel power from £44,865 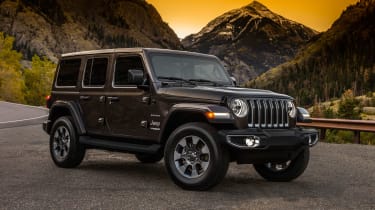 This is the new 2019 Jeep Wrangler, the latest rough-and-tumble SUV from the iconic American off-road brand. The new Wrangler is on sale now in a choice of two- or four-door body styles, with prices from £44,865. The diesel models were introduced first, with petrol models now available too.

The new Wrangler follows in its forebears’ footsteps, offering a no-nonsense combination of practicality and go-anywhere four-wheel-drive ability, all packaged in a body that’s not too far removed from that of the brand’s oldest SUVs. Jeep claims the Wrangler is the “only authentic full open-air 4x4 SUV available on the market” – something that should remain the case for the foreseeable future.

There are three trim levels to choose from, and none offer particularly excellent value for money. The ‘entry-level’ Sahara model starts at £44,865, while both Overland and top-spec Rubicon models kick off at £46,495. Each is offered in either two- or four-door bodystyles, with each iteration of the latter costing £1,500 more than its equivalent two-door. The Wrangler will be offered with the brand’s '5-3-5' offer, which combines a five-year warranty, three-year servicing programme and five years of roadside assistance. 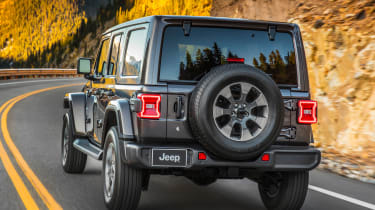 Despite the timeless appearance, all models come with plenty of state-of-the-art features. Automatic LED headlights, keyless entry, a reversing camera, European mapping and smartphone mirroring are all included, which does help justify the asking prices. The Overland model gets leather upholstery, heated front seats and blind-spot monitoring, while the top-spec Rubicon has decals inside and out, and a range of equipment designed to allow the Wrangler to cross almost any terrain.

The Jeep Wrangler is offered with a 2.2-litre four-cylinder diesel and a 2.0-litre four-cylinder petrol engine. The diesel gets 200bhp and is paired to an eight-speed automatic gearbox as standard; all models also get four-wheel drive as standard, with one of two systems fitted depending on trim level. Meanwhile, the petrol comes with 272bhp and almost as much low-down pulling power as the diesel. Both engines are Euro 6 compliant.

Two-door models offer up to 31mpg and 37mpg in petrol and diesel form respectively, while the extra bulk of the four-door models results in a slight economy penalty.

In keeping with the model’s reputation for personalisation, the new Jeep Wrangler will be available in 10 colours: Black, Firecracker Red, Billet Silver Metallic, Bright White, Granite Crystal Metallic, Hellayella, Ocean Blue, Punk’n Metallic, Mojito and Sting Gray. A choice of convertible roof options will be offered, along with a removable three-panel hard top. It may not have been designed with the British climate in mind, but you can drive the Jeep without any roof panels, doors or windscreens if you wish.

Features such as blind-spot monitoring, rollover prevention software and rear cross-traffic alert aren’t enough to boost the Wrangler’s safety rating, which was rated at just one star by Euro NCAP. The Wrangler only features four airbags as standard, which is one of the reasons for its poor score.

Read our Jeep Wrangler review, or see which other large SUVs you should consider instead. 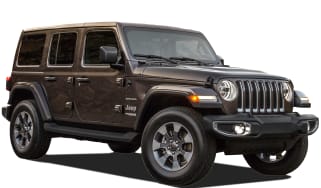