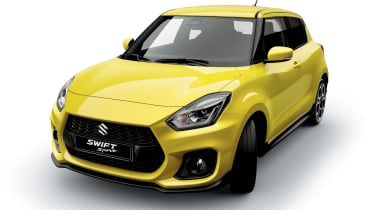 Buy a new Suzuki Swift Sport in June and it'll cost £16,499 – saving you nearly £1,500 off its normal £17,995 list price. The celebratory launch price also widens the gap from the Swift Sport to the forthcoming Ford Fiesta ST, which is set to cost from £18,995 in entry-level ST-1 guise.

The new Suzuki Swift Sport was revealed at the 2017 Frankfurt Motor Show. While the old car featured a 1.6-litre petrol engine without a turbocharger, the 2018 Swift Sport is fitted with the same 1.4-litre turbocharged petrol engine as used in the Suzuki Vitara SUV, and we’ve already driven it. 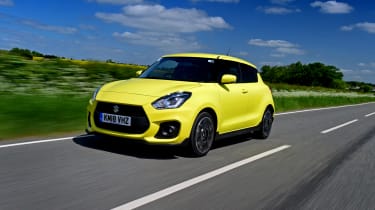 The engine upgrade brings a modest power increase of 4bhp over the old Swift Sport, but given the new car is around 130kg lighter than its predecessor and has 44% more torque, performance gets a noticeable boost. The old Swift Sport took 8.7 seconds to go from 0-62mph, but the latest model cuts this to 8.1 seconds.

Suzuki has developed subtle yet noticeable styling enhancements for the Swift Sport compared to the standard version. Instead of horizontal slats, the radiator grille is finished with a three-dimensional ‘waffle’ finish, while it’s also a deeper, one-piece affair now.

Two-tone black and silver alloy wheels and twin exhaust pipes lend the Sport a more aggressive stance, while a contrasting black carbon (or carbon effect) strip runs along the lower edge of the car, taking in the side sills as well as the front and rear bumpers as it does so. 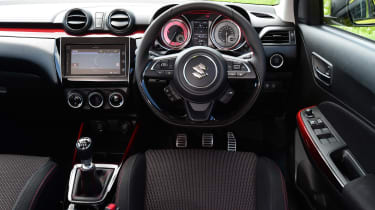 Inside, the unique steering wheel features a textured finish for improved grip, while the instruments get a red finish and the headrests bear a 'Sport' motif.

The new Swift Sport is only be available as a five-door hatchback, unlike the old model, which also came as a three-door.

A highlight of the Swift Sport is its high standard specification, with features including a rear-view camera, front foglights, LED headlights, unique 17-inch alloy wheels, adaptive cruise control and lane-departure warning. The infotainment system also has a smartphone link and sat nav. Customers can choose from one solid and five metallic colours at no extra cost. The most striking is Champion Yellow – a hue inspired by Suzuki's works Junior World Rally Championship cars.

Suzuki unveiled the Swift Sport at the 2017 Frankfurt Motor Show, and it’s on sale from 1 June. A launch offer during June sees eager customers pay £16,499 if they order before the end of the month, while the normal list price is £17,995.