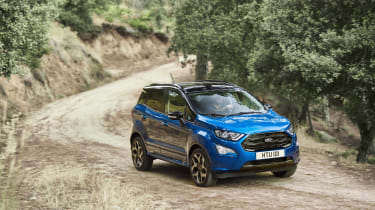 The Ford EcoSport has been updated with a raft of tweaks to maintain its appeal to those after a small SUV crossover. Buyers considering a Peugeot 2008, Renault Captur or Citroen C4 Cactus will be interested to learn that while (like the rivals listed) the EcoSport was previously front-wheel drive, it’ll be offered with a 4x4 option from “mid-2018”.

The EcoSport got a round of updates back in 2015 and this latest revision is set to improve the car further. The new four-wheel-drive option will be offered with a new engine, namely a 123bhp 1.5-litre diesel; that combination results in an official economy figure of 62.7mpg. The existing 1.5-litre Duratorq diesel engine is offered in 99bhp guise and front-wheel drive as well, while a 99bhp version of Ford’s 1.0-litre three-cylinder EcoBoost engine features, too.

The changes are relatively subtle on the outside, but the new EcoBoost features a new radiator grille, a new rear bumper and lights, fresh paint colours and alloy wheels, together with an optional two-tone contrasting roof. 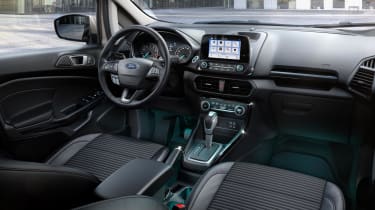 The interior – arguably where the EcoSport was most in need of attention – has been much improved, with a completely new look and greater functionality. Gone is the old model’s button-heavy dashboard and in its place is the SYNC3 ‘floating’ touchscreen system from the latest Ford Fiesta – a car with which the EcoSport shares a mechanical backbone.

While an eight-inch system will top the infotainment range, 6.5 and 4.2-inch offerings will also be available. Apple CarPlay and Android Auto smartphone connectivity also put in an appearance, together with a new 10-speaker B&O Play sound system and a height-adjustable boot floor.

In a further development, the EcoSport is available with ST-Line trim, following the popularity this sporty-looking trim has found with Focus, Fiesta, Kuga and Mondeo buyers. Those after an EcoSport are likely to be tempted by the ST-Line model’s 17-inch dark alloy wheels, flat-bottomed leather steering wheel, subtle bodykit, revised suspension and part-leather seats.