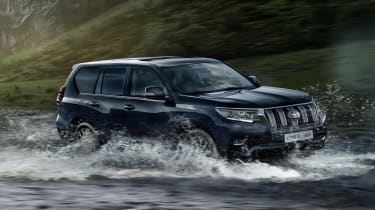 Prices and specifications for the new Toyota Land Cruiser have been announced, with orders now being taken for the 2018 model of the large and deeply capable SUV.

Originally unveiled at the Frankfurt Motor Show last year, the newest Land Cruiser gets bolder looks, new technology and a more upmarket interior keeping it in contention with the latest Land Rover Discovery.

More extensive than a mere facelift, the Land Cruiser has grown by 60mm in length in five-door guise. Unlike the Discovery, however, the Toyota still uses a body-on-frame construction method. This makes the Land Cruiser tough and ideal for off-roading and towing, but also quite heavy.

The exterior design is based on Toyota's 'Total Practicality' philosophy, with the grille and headlights positioned to allow the best possible wading depth through swamps and floods, rather than to merely look smart. The bonnet has been reshaped to improve forward visibility, while the front wings have been lifted up to help the driver locate the front corners with better accuracy.

The high-set grille and LED headlights have been merged together, with the grille made bigger for optimum cooling and the light clusters recessed to help protect them from being bashed by branches, or whatever else you may encounter. Similarly, the front bumper has been shaped like a skid plate to improve ruggedness.

The new Land Cruiser is available in short-wheelbase three-door and long-wheelbase five-door versions, with the latter offered in five or seven-seater versions. There are four trim levels to choose from: Utility, Active, Icon and Invincible. 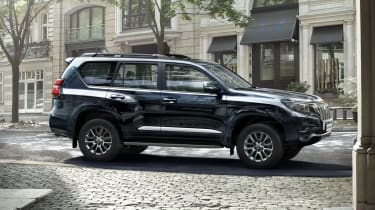 The Utility trim is aimed at buyers looking for a pared-back, more work-friendly machine – and is the only available trim for a short-wheelbase Land Cruiser. It's the only version to get a manual gearbox, which comes as standard on the three-door and is optional on the five-door. Steel 17-inch wheels and fabric seats continue the feeling of simplicity, but there are still plenty of luxuries, including cruise control, automatic headlights, air-conditioning and Bluetooth connectivity.

Active brings the option of seven seats, along with some more refinements. The steel wheels are replaced by 17-inch alloys, while dual-zone automatic air-conditioning, a leather steering wheel and Toyota’s Touch 2 infotainment system with a nine-speaker stereo also feature.

The best balance of price and technology seems to be offered by the Icon model, which adds 19-inch alloys, leather seats (heated and ventilated in the front), sat nav, LED headlights and a complement of Toyota Safety Sense active safety systems, including adaptive cruise control and lane-departure warning.

The Land Cruiser Invincible gets a locking rear differential, dynamic suspension and a drive mode called 'Multi-Terrain Select', plus ‘crawl control’ and a 360-degree camera system – all of which help make off-roading easier.

Interior pizzazz has never been a Land Cruiser strong point, but the latest revision has a new instrument binnacle and centre console with separate zones for different functions of the car. As with the exterior, ease of use in extreme conditions has taken precedence over appearance. Toyota has even lowered the fascia for "better front-on visibility when driving off-road".

The old infotainment system has been replaced by an eight-inch screen, while the instrument cluster sticks with four gauges flanking a new 4.2-inch TFT digital display. This provides information on the vehicle and media playback and operated by new steering-wheel controls.Interior illumination has been switched to white LEDs for the instruments, centre console, switches and even the footwells and glovebox. The upholstery, meanwhile, is available in three colour themes.

Power still comes from Toyota's 2.8-litre D-4D diesel engine with 175bhp and the option of a six-speed manual or six-speed automatic gearbox. Fitted with the latter, the Land Cruiser will get from 0-62mph in 12.7 seconds and hit a top speed of 109mph. With a 2.0-litre diesel, the Discovery can get from 0-62mph in 8.3 seconds. Fuel economy for the automatic is 38.2mpg and CO2 images are 194g/km, with the aforementioned Discovery managing 43.5mpg and 171g/km.

The new Land Cruiser is available to order now, with prices starting at £32,795 for the three-door model in Utility trim with its manual gearbox, while the same spec in five-door guise starts at £34,095 – or £35,795 for an automatic.

All Land Cruisers above Utility trim are long-wheelbase five-door models with an automatic gearbox. Active trim starts at £39,095, climbing to £39,700 for a seven-seater.Icon is only available with seven seats and starts at £47,495, while the top-spec seven-seat Invincible starts at £52,295.

Every Land Cruiser is covered by Toyota’s five-year/100,000-mile warranty – but if the SUV’s reputation is anything to go by, it’s highly unlikely you’ll ever need to make use of it. 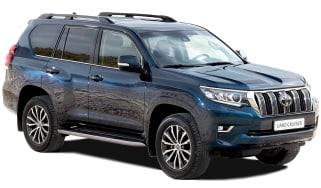