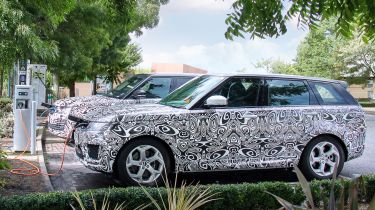 The Range Rover and Range Rover Sport are to gain plug-in hybrid (PHEV) variants towards the end of the year, company bosses have confirmed.

Speaking at the 2017 Frankfurt Motor Show, Jaguar Land Rover (JLR) CEO Dr Ralf Speth confirmed Range Rovers would be the first models to benefit from the company’s recently announced strategy to offer all of its vehicles with some form of electrification by 2020.

Previous spy shots of a camouflaged Range Rover Sport bearing high-voltage stickers have indicated a PHEV model was in the pipeline and this announcement at Frankfurt confirms suspicions Range Rover is headed for the hybrid horizon.

The hybrid Range Rover and Range Rover Sport will be followed by the all-electric Jaguar I-Pace, which is currently slated to go on sale in 2018.

It’s possible hybrid Range Rover models could borrow some of the architecture from the I-Pace. It’s also reasonable to assume they’ll feature JLR’s latest ‘Ingenium’ 2.0-litre turbocharged petrol engine and an electric battery/motor setup, which should provide somewhere in the region of 300bhp, together with an all-electric range of 30 miles.

The large Range Rover is already offered in diesel-electric HEV guise, but the plug-in hybrid setup promised would likely make use of the more popular petrol-electric combination.

No further details have been announced, although the company has released a picture of a brace of disguised Range Rovers plugged in and charging up.