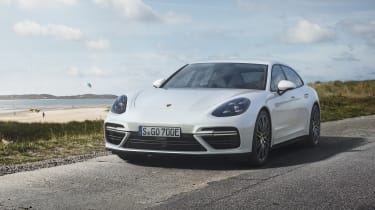 Showing just how significant hybrid power has become to the performance-car industry, the Porsche Panamera Sport Turismo range is now headed by a Turbo S E-Hybrid model – with a total system power of 671bhp.

The word 'hybrid' often implies fuel-efficiency and claimed economy of 97mpg suggest this is true of the Porsche Panamera Sport Turismo Turbo S E-Hybrid, too, along with zero CO2 emissions when travelling in electric mode. However, parsimony certainly hasn't taken the place of performance – with a 0-62mph time of 3.4 seconds, the E-Hybrid deserves its range-topping status. 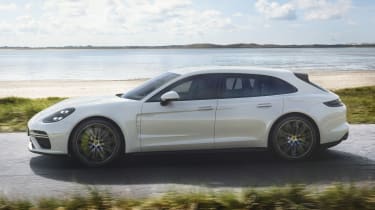 This performance comes from the same 542bhp twin-turbocharged V8 petrol engine as the Porsche Panamera Turbo, but here it's combined with a 134bhp electric motor and lithium-ion battery. When they work together, a total of 671bhp is unleashed to all four wheels through an eight-speed dual-clutch PDK gearbox. Response when accelerating is said to be instantaneous – 124mph can be reached in 11.9 seconds from rest and you can keep going to a 192mph top speed if you've somewhere safe and legal to do so.

On the economical side of the Turbo S E-Hybrid's split personality, the 14.1kWh (kiloWatt hour) battery capacity is claimed to allow up to 31 miles of silent, all-electric motoring before petrol power is needed. Electric mode can take you to 87mph, although travelling this fast is likely to drain the battery long before 31 miles is reached. A full recharge is said to be possible in 2.4 hours, but some chargers can take as long as six hours. 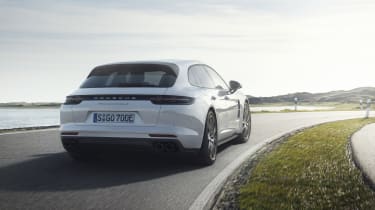 While low claimed emissions will broaden the E-Hybrid's appeal among business users – CO2-based Benefit-in-Kind (BiK) tax will be lower than for the conventional Porsche Panamera Turbo – its focus really is more on excitement than environmental kindness and its technology has evolved from the trackday-dominating Porsche 918 Spider supercar. Additional performance-boosting features include a roof spoiler that adjusts automatically depending on the driving situation, providing up to 50kg of Formula 1-style downforce.

Although 'active aero' like this is most commonly seen on the racetrack, it only performs in a grip-enhancing role at speeds of 105mph and above – at lower speeds it adopts a position to minimise aerodynamic drag, improving fuel economy. When the panoramic roof is open, though, it inclines to 26 degrees to reduce air turbulence, for both better economy and a quieter travelling environment for passengers. 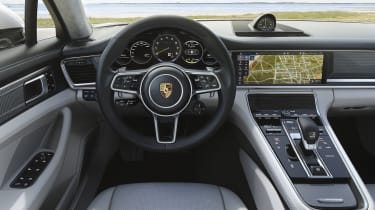 Like other Sport Turismo models, the Turbo S E-Hybrid has three rear seats – two individual outer 'buckets' and a narrow fifth central seat for occasional use. Twin reclining rear seats are available optionally. Porsche's dynamic chassis control and a torque-vectoring limited-slip differential are standard to help drivers deploy all that power safely, while standard ceramic brakes allow high speeds to be scrubbed off in a hurry. Adaptive air suspension is also provided, allowing a sporty or relaxing demeanor to be chosen according to your mood.