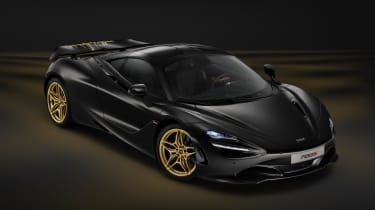 McLaren Special Operations (MSO) has displayed its latest creation at the 2017 Dubai International Motor Show: a bespoke McLaren 720S ‘inspired by the words of Bruce McLaren’, the company’s founder. The car was made to order for a customer who will take delivery soon after the show.

The product of the MSO Bespoke programme, which allows customers ‘almost limitless’ customisation options, the 720S is finished in satin black paint with gold-coloured wheels, with matching interior trim. In a nod to the famous McLaren F1 of the 1990s, the car features a 24-carat gold engine heat shield.

Another exclusive addition to the car is the bespoke graphics on the rear spoiler: a stylised arabic phrase intended to resemble the Dubai skyline. The phrase reads: “Life is measured in achievement, not in years alone”, a quote by McLaren’s founder, Bruce McLaren. The decoration took 30 hours to complete, using specially-made stencils. 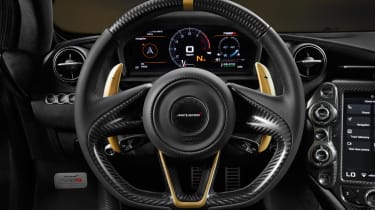 Inside, the car features swathes of black Alcantara and leather, plus plenty of extra carbon fibre trim. The gearshift paddles and steering wheel gain a gold-coloured satin finish that’s repeated on the inside of each door.

In total, the car’s bespoke treatment added 120 hours to the usual production time for a McLaren 720S.

Andreas Bareis, managing director Middle East, Africa & Latin America for McLaren Automotive, said: “The quote from Bruce McLaren rings true not only of the history of McLaren, but also the achievements of the UAE and the Gulf states over the last four decades. The UAE and the region are very important to McLaren, not only in terms of our client base, but also because of the support from our shareholders. This car pays tribute to that.”