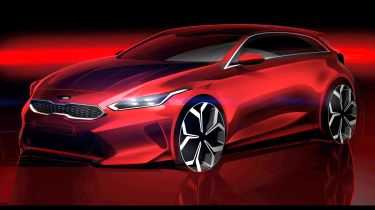 The new Kia Ceed will make its public debut at the Geneva Motor Show in March – and this time it’ll be without the apostrophe. Kia’s Ford Focus rival will be offered in a wide range of bodystyles, and Kia has revealed two will be displayed at the show.

The five-door hatchback, which Kia has teased with this single sketch, will be shown, along with an as-yet-unconfirmed second model. It's thought this mystery model could be a small SUV, or a sleek ‘shooting brake’ estate.

This year is being referred to as ‘the year of the Ceed’ by Kia bosses. The standard five-door hatchback will be followed by a performance model, badged Ceed GT; a conventional ‘Sportwagon’ estate; and a shooting brake estate, which will be similar in concept to the Mercedes CLA Shooting Brake. A Ceed ‘crossover’ will also feature in the line-up and is expected have a similar jacked-up stance to the Mercedes GLA.

Expect a step up in interior quality across the entire Ceed range, with a chunky steering wheel, a large touchscreen and the same kind of award-winning technology found in Kia’s more recent models.

Kia describes the new Ceed as featuring “a mature and athletic new design, and a more engaging drive”, which has been inspired by the Kia Stinger, as well as a “self-confident new look”.

The car has been developed specifically for European tastes. Kia says the “ride and handling characteristics of the new model elevate the Ceed over its predecessor in terms of dynamism, driver engagement and refinement”.

The third-generation Kia Ceed has been designed at the firm’s facility in Frankfurt, Germany. Kia says that fact is referenced in the car's name, which references Community of Europe, with European Design.

The new Kia Ceed will go on sale around the middle of 2018. Prices and specifications will be revealed nearer the car’s launch.