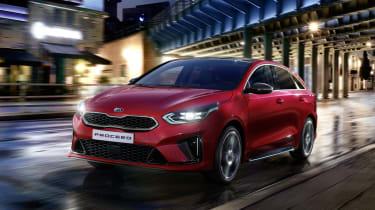 Prices have been announced for the new Kia ProCeed – the rakish five-door coupe version of the standard Kia Ceed that’s set to go on sale early in 2019. It will start from £23,835 with a 1.4-litre petrol in GT-Line trim, while the range-topping GT version with 201bhp will cost £28,135.

The new car will sit above the Kia Ceed Sportswagon estate in the range, aiming to tempt buyers away from models like the Audi A3 and Mercedes A-Class. The car will be built in Slovakia and has been designed, developed and engineered in Europe.

Prices for the Kia Ceed were announced at the same time that Kia revealed the GT-Line trim for the car, which brings a makeover inside and out. It's characterised by a gloss black grille and sporty features like a flat-bottomed steering wheel, sports seats and a black headlining. In the hatchback, GT-Line is available with the 1.0-litre and 1.4-litre, along with the 1.6-litre diesel.

Although effectively a replacement for the old Kia pro_cee’d three-door hatchback, the new ProCeed boasts five doors and is longer than the Kia Ceed Sportswagon, albeit with a lower, swooping roofline and lowered suspension. The result is a sportier – but still practical – take on the range-topping Ceed model. Kia describes it as a 'shooting brake'.

The new car will be powered by a range of petrol and diesel engines, while its ride and handling have been developed “exclusively for European roads and European drivers”. With rivals like the new Ford Focus setting benchmarks for fun-to-drive family cars, Kia has stepped up its game for its new Ceed models.

A suite of technological improvements first seen on the new Kia Ceed will be carried over to the new ProCeed: uprated infotainment, driving mode selection and a range of active safety features all feature.

When the Kia ProCeed concept car was revealed, Kia's European design boss Gregory Guillaume said: “With many European drivers now seeking performance alternatives to the three-door hot hatch style, we began thinking about a different halo model for the Cee’d family. The ProCeed Concept represents a bold new vision of how the vibrant soul of the Pro_cee’d could be reincarnated and revitalised for a new generation of performance-oriented drivers.”

In saying this, Guillaume made it clear that the ProCeed would have a very different character to the Kia Ceed Sportswagon estate – and that much is clear now that the production car has been revealed. The new car sets itself apart with a low roofline and a unique silhouette that’s more akin to that of the Porsche Panamera Sport Turismo.

Up front, Kia's trademark 'ice-cube' LED front headlights feature, along with much of standard Ceed’s styling cues. However, things get more interesting towards the rear, where a wide light bar, twin exhausts and a small spoiler help set the car apart from others in the range.

There's a generous 594 litres of space in that shapely boot, which actually beats less-curvaceous rivals like the Renault Megane Sport Tourer and Vauxhall Astra Estate. In fact, it's not far short of the more conventional Kia Ceed Sportswagon's 625 litres. The rear bench can be folded completely flat, too.

The ProCeed will be offered in three trim levels: GT-Line, GT-Line S and GT. GT-Line comes with DAB radio, Bluetooth, an eight-inch touchscreen with sat nav, a rear-view camera and rear parking sensors.

The high-performance GT trim is based on GT-Line, but also gets 18-inch wheels, a gloss black and chrome grille, a new rear bumper with dual exhausts, LED headlights and red accents for exterior trim.

There are two petrol engines and one diesel to choose from. A four-cylinder 1.4 with 138bhp kicks off the range and a 1.6-litre boasts 201bhp. The sole diesel option is a 1.6-litre with 134bhp – an engine Kia claims is its cleanest diesel ever. Full performance and economy figures have yet to be released, but each engine is likely to offer a usable balance of each. 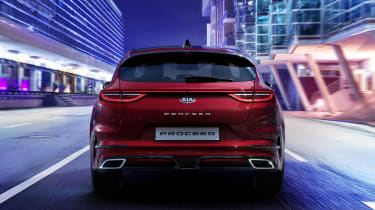 All engine options come with a six-speed manual gearbox as standard, with the option of a seven-speed dual-clutch automatic.

Much like the standard Kia Ceed, the ProCeed gets a full complement of up-to-date safety and assistance equipment. Standard systems include high-beam assistance, driver attention warning, lane-keeping assistance and forward collision-avoidance assistance, while adaptive cruise control, blind-spot monitoring, rear cross-traffic alerts, parking assistance and pedestrian recognition are all offered as options. Another optional system is lane-following assistance, which tracks traffic ahead, detects road markings and keeps the car in lane on motorways while controlling acceleration, braking and steering.

2019 Kia ProCeed prototype on the road

The new Kia ProCeed has the task of injecting a bit of upmarket appeal to the top of the Kia Ceed range when sales begin in 2019, and we've been behind the wheel of a prototype car ahead of the new model's official release.

On the move, the ProCeed feels more sophisticated than the regular Ceed, albeit a little more firm-riding thanks to its stiffer front and rear springs. Press the 'Sport' button and a sound actuator makes the exhaust note a little more distinctive and adds more weight to the steering, while also sharpening the throttle. 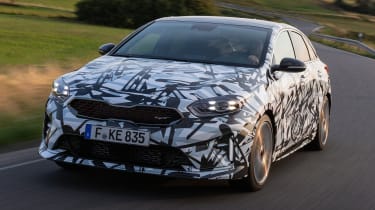 However, we still think the steering could use a little more feel, and Kia says that the accelerator may be re-calibrated before sale, which would address our criticism of the ProCeed's slight hesitancy when you ask for more power. Meanwhile, the seven-speed dual-clutch automatic gearbox of our test car proved very smooth and quick-shifting – a six-speed manual will also be offered.

Inside the ProCeed prototype, the shapely sports seats seem comfortable and supportive. However, aside from some red trim highlights, the interior is otherwise virtually the same as the Ceed and displays the same impressive quality and high level of standard equipment. That curvy shape does rob passengers of headroom, though, and makes it a little awkward for taller passengers to get in and out. The steeply raked rear windscreen doesn't provide such a good view out when reversing as you get in the hatchback, either.