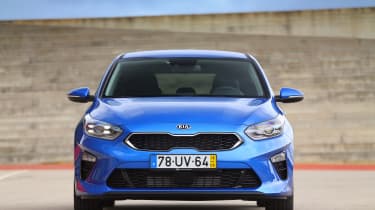 Kia is adding a sporty GT model to the Kia Ceed hatchback range, to complement the range-topping Kia ProCeed GT shooting brake. Both models will be launched during the Paris Motor Show in October.

Production of the Ceed GT will begin in November at Kia’s Slovakian plant, alongside the Kia Ceed hatchback and Sportswagon and the stylish ProCeed flagship. The GT versions of the Ceed and ProCeed are the latest in Kia's range of high-performance models, which includes the Kia Stinger GT that mounted the brand's first attack on premium rivals such as the BMW 4 Series and Audi A5 Sportback.

Although its exterior style is more expressive than the standard Ceed, the GT doesn't aim to match the exuberance of sister brand Hyundai's i30 N hot hatch. While the re-contoured front bumpers and their big air intakes join a honeycomb 'tiger-nose' grille with red highlights to tell the GT apart from other Ceed models, its overall look is fairly restrained.

18-inch aluminium alloy wheels are standard and a 5mm reduction in ride height provides a lower stance, while the GT's sportier look is rounded off with a subtle roof spoiler and gloss-black diffuser built into a restyled rear bumper. Eight paint finishes will be offered. 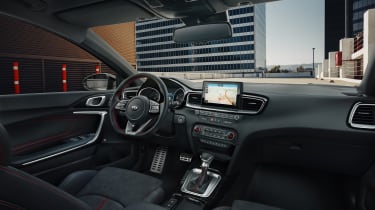 Inside, the Ceed GT is distinguished by a black rooflining and a flat-bottomed steering wheel with a ‘GT’ logo. Where the optional dual-clutch automatic gearbox is fitted, alloy gearshift paddles are found behind the steering wheel, matching the GT's alloy pedals. Sports seats are standard, and trimmed in black leather and suede with contrasting red stitching and a ‘GT’ logo.

The Kia Ceed GT has been developed under the supervision of ex-BMW M man Albert Biermann, head of Kia's high performance vehicle development, who also oversaw development and testing of the Kia Stinger GT. It's claimed that the Ceed GT underwent six months of additional performance testing compared to other models in the Ceed range.

As well as a 5mm suspension drop, the Ceed GT uses stiffer front and rear springs to reduce body lean in corners, while the unusual step to employ softer front and rear anti-roll bars has been taken, with the claim of enhanced traction and grip.Kia says that the GT's stability control system has been recalibrated to be less heavy-handed in operation, affording experienced drivers the chance to take the car close to its handling limits. And, for those who overstep the mark, larger 320mm front brakes will provide more reassurance than the standard car's 288mm items.

Under the bonnet, Kia's 1.6-litre T-GDi petrol engine has been tuned to 201bhp, and is claimed to produce most of its pulling power between 1,500 and 4,500rpm for impressive flexibility. A six-speed manual transmission is standard and there's a seven-speed dual-clutch automatic optional, which comes with shift paddles for fast manual gearchanges. The automatic introduces drive select, with a sport mode that brings weightier steering and a snappier accelerator and gearbox response, or normal mode which places the emphasis on relaxation. 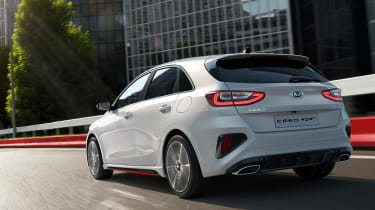 There's also an electronic engine sound generator that's claimed to pump "a characterful GT engine note into the cabin". This works in conjunction with new exhaust flaps that opens when the accelerator pedal is pushed hard down to allow the car's natural voice to be heard more clearly, while remaining hushed at lower speeds.

Positioned at the top of the Ceed hatchback range, the GT promises a long list of standard equipment. You can opt for seven or eight-inch versions of Kia's ‘floating’ touchscreen infotainment system, or an eight-inch touchscreen, with TomTom navigation a feature of the latter as well as Apple CarPlay and Android Auto. A powerful JBL stereo is available as an option.

Safety equipment is generous, too, running from the usual high-beam assistance and driver attention warning to lane-keeping assistance and autonomous emergency braking. Lane-following assistance is optional, providing semi-autonomous support to maintain lane positioning and speed relative to other traffic at speeds between 0 and 112mph.

Although the Kia Ceed GT and the Kia ProCeed GT will both be unveiled during October's Paris Motor Show, no date has yet been confirmed for UK sales to begin. We expect the fastest Ceed to arrive in showrooms early in 2019, priced to sit at the top of a range that currently runs from £18,295 to £26,850.