Race-inspired 710bhp Ferrari 488 Pista starts at over £250k, but is already sold out 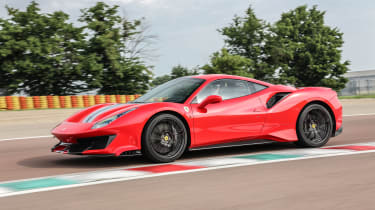 This is the 2019 Ferrari 488 Pista, a race-car-influenced version of the standard 488 GTB that becomes the most powerful V8-engined Ferrari in the company’s history. Prices start at a cool £252,795, but if you want one, you're already too late – Ferrari pre-sold every example to existing customers before the Pista was even announced.

Boasting a range of developments and performance enhancements carried over from Ferrari’s motorsport endeavours, the 488 Pista (Italian for ‘track’) is the latest model in the manufacturer’s V8 special series, which also includes the 360 Challenge Stradale, 430 Scuderia and 458 Speciale.

Despite the name, the Pista remains road-legal, although its full potential will doubtless only be useable on a race circuit. Power is up from 660bhp in the standard 488 to 710bhp in the Pista, and the twin-turbo V8 engine has also been made lighter thanks to various lightweight parts including new exhaust manifolds, crankshaft, flywheel, con rods and air intakes.

Ferrari has cut a total of 90kg from the weight of the standard 488 to enhance the 488 Pista’s handling and improved its aerodynamic efficiency with F1-influenced changes to the car’s front and rear diffusers, undertray and air intakes. A blown rear spoiler with a ‘suspended’ appearance has been reshaped and made longer and higher for increased performance. Ferrari claims the net effect of the aero improvements is a 20% increase in downforce. 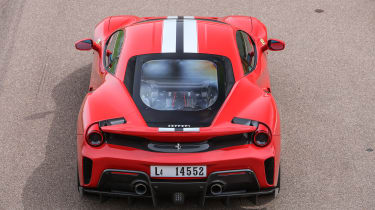 The 488 Pista comes with a variety of electronic control systems to help manage the car’s power and driving dynamics, one of which is Ferrari Dynamic Enhancer. The system uses software to adjust brake pressure at the callipers, which Ferrari claims is a world first, in order to allow more control, performance and driver confidence in corners.

Although some of the changes to the standard 488 have undoubtedly made the 488 Pista a faster and more extreme performance car, Ferrari has made other changes in order to make the car’s performance more accessible for drivers of all abilities. The result is a car that feels manageable and less intimidating on the limit than the numbers suggest.

The car also offers some degree of practicality: there’s a 170-litre front boot and a 78-litre fuel tank, which, with claimed economy of 24.6mpg, should provide a good range for this sort of car. CO2 emissions of 263g/km are high, but to be expected given the engine’s immense performance. 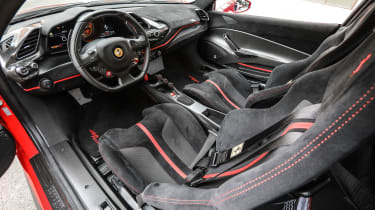 The engine cover, bumpers and rear spoiler are all made from carbon-fibre, while the 488 Pista is the first Ferrari available with optional 20-inch carbon-fibre wheels. The car also comes with tyres specifically developed by Michelin.

The interior boasts a sporty, pared-back design, which complements the racing livery colour scheme on the outside of the car.

Given the weight reduction and power increase versus the standard 488, it's little surprise that 488 Pista is capable of 0-62mph in just 2.85 seconds and a top speed of 211mph.