Van-based 2018 Peugeot Rifter MPV to offer space, comfort and practicality with a dash of style 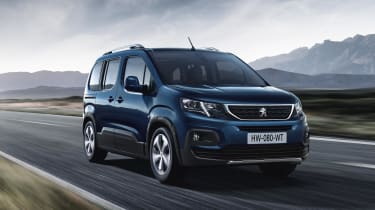 Peugeot has announced prices and specifications for its all-new Rifter MPV. While no official on-sale date has been announced, it’s expected in UK showrooms soon priced from £19,650.

The Peugeot Rifter is the replacement for the Peugeot Partner Tepee MPV. Like its predecessor, the Rifter is a van-based MPV and shares mechanical underpinnings with its PSA group siblings the Citroen Berlingo and Vauxhall Combo Life. Commercial vehicle origins mean all three offer huge practicality, with running costs that promise not to break the bank.

To set the Rifter apart from its Citroen and Vauxhall relatives, Peugeot has made sure that the Rifter fits in with the rest of its stylish range. The car gets the brand’s trademark front-end treatment a range of attractive paint finishes and chunky plastic cladding for an SUV-like look.

These cars have the biggest boots you can buy right now:

Peugeot claims the latter is backed up by the Rifter's 'advanced grip control' system, which works in conjunction with special mud and snow tyres to give extra traction on tricky surfaces; the Peugeot 2008, Peugeot 3008 and Peugeot 5008 SUVs use the same system. It's claimed to offer an alternative to four-wheel drive without increasing fuel consumption.

Inside, Peugeot’s unique ‘iCockpit’ design stands out – a combination of small steering wheel and high-set dials that features across the range. There’s an eight-inch centrally mounted infotainment screen and a choice of classy decorative trim for the dashboard and extended centre console. 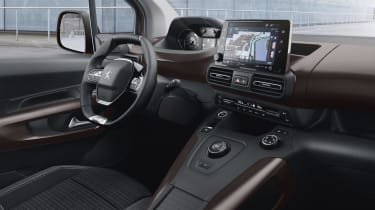 The Rifter is powered by petrol and diesel engines including a 109bhp 1.2-litre PureTech petrol paired with a six-speed manual gearbox and a 130bhp 1.5-litre BlueHDi diesel, with a choice of six-speed manual or eight-speed automatic gearboxes. Three trim levels are offered: Active, Allure and GT Line, each of which can be chosen in short and long-wheelbase versions, both of which will be available with five or seven seats. The latter configuration will be available in 2019, with five-seaters available from the outset.

Every model packs an impressive list of safety features, with lane keeping assist, speed limit recognition and autonomous emergency braking standard across the range. DAB digital radio is standard, while every model has aluminium roof bars for a smart look and extra carrying flexibility. The entry-level Active starts at £19,650 for the standard version and £21,570 or the long version.

Allure models add electric rear windows, rear parking sensors, seat-back tray tables, an infotainment system with an 8.0-inch touchscreen display, MirrorLink, Apple CarPlay and Android Auto compatibility, plus voice recognition. Outside, there are LED daytime running lights and a smart set of 16-inch alloy wheels. The Peugeot Rifter Allure starts from £20,920 for the standard model or £22,620 for the long-wheelbase version.

Topping the range, the GT Line has a similarly sporty theme to Renault Megane and Renault Captur GT Line models. It boasts a panoramic sunroof, keyless entry, dual-zone climate control and power folding mirrors, as well as sat nav with 3D mapping. 17-inch alloy wheels complete the package. You'll pay £22,570 for the standard and £24,270 for the longer version.