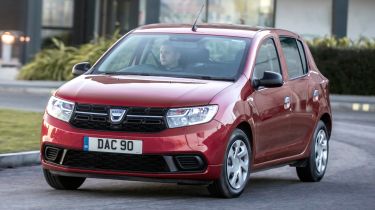 The Dacia Sandero is still the UK’s cheapest car five years after it was first introduced – even though its price has increased by £1,000 for 2018.

Electric windows, a radio and alloy wheels are not included on the Access model, although stepping up to Ambience or Laureate trim brings more creature comforts. The former is available for an £800 premium over the standard car, bringing DAB radio, Bluetooth connectivity, manual air-conditioning and front electric windows.

The Dacia Sandero Access’ low on-the-road price is matched by some impressive finance deals. When purchased through Dacia’s Dimensions PCP, the car is available from just £89 per month with a £1,367 deposit (including a £250 deposit contribution from Dacia).

It's worth noting, however, that while the Sandero still undercuts its nearest rivals by a considerable margin – offering supermini space and practicality for city-car money – it's not quite as refined, capable or safe as more expensive mainstream options like the Ford Fiesta, Vauxhall Corsa or Suzuki Swift.

Despite its basic appointments, the Sandero remains a popular choice with budget-conscious buyers. Our Driver Power 2017 customer satisfaction survey saw the Sandero finish 68th out of 75 cars overall, ahead of the Renault Clio (70th), Audi A1 (74th) and Volkswagen up! (75th).