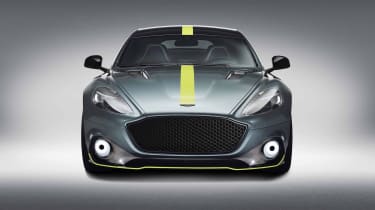 The end is almost in sight for the Aston Martin Rapide, but rather than fading away into history, the high-performance four-door is set to bow out with a bang in the shape of this special AMR edition.

The Rapide AMR was revealed in concept form at the 2017 Geneva Motor Show and only 210 examples will be produced. With a bold front grille that recalls that of the Vantage AMR Pro trackday special, the Rapide has received an aerodynamic redesign for reduced lift and more grip on the road. Strong, lightweight carbon-fibre is used for the splitter, sills, rear diffuser and spoiler, as well as the bonnet, which has prominent ventilation slots. 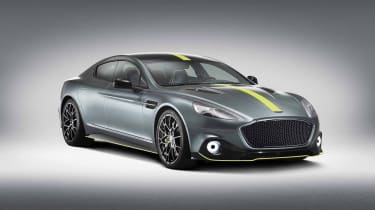 Compared to the standard Rapide, greater agility is claimed following modifications to the car's adaptive dampers, including a 10mm lower ride height. The Rapide AMR is also the first Aston Martin to wear 21-inch wheels, and their multi-spoke design is claimed to enhance cooling of the car's standard carbon-ceramic brakes – a feature never seen before on the Rapide that's claimed to offer "a noticeably beneficial effect on the driving experience", following development work at Aston Martin's Performance Centre, based at the world-famous Nurburgring circuit. 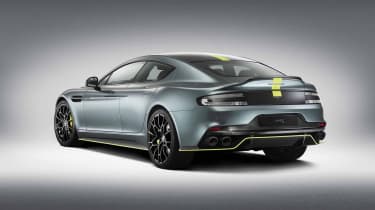 The Rapide AMR is available in three special design schemes, dubbed Standard, Silhouette and Signature. The Standard shares the lime-green highlights of the DB11 AMR, adorning the front splitter, rear diffuser and sill mouldings. Silhouette is more discreet, with a full-length stripe in China Grey or Clubsport White to contrast with the Mariana Blue, Scintilla Silver, Lightning Silver or Onyx Black body colours offered on both the Standard and Silhouette.

Those in search of an authentic Aston Martin Racing look might prefer the Signature, which combines Stirling Green paint with the Standard's lime accents and adds a bold lime stripe that flows between the winged Aston Martin crests on bonnet and bootlid. 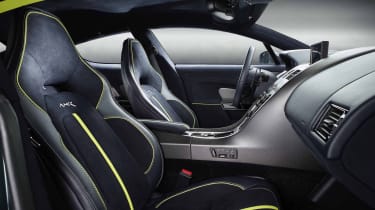 Each model has an interior to match the character of its exterior, with either AMR Lime or Galena Silver decor and stitching highlights. All have a full-length centre console in carbon fibre and Alcantara suede seats with subtle AMR logos, which are repeated on the carbon sill covers and AMR-inscribed designation plaque. There's also a steering wheel similar to the one found in the Aston Martin One-77 hypercar. The company's 'Q by Aston Martin' personalisation service is on hand should you wish to tailor a Rapide AMR to your precise taste.

The Aston Martin Rapide AMR will start at £194,950 when it goes on sale in the UK, with the first customer deliveries set for the last quarter of 2018.