"If you need to carry four people in style and at pace, few cars match the momentous talents of the&nbsp;Aston Martin Rapide S, but they come with a huge price tag..."&nbsp; 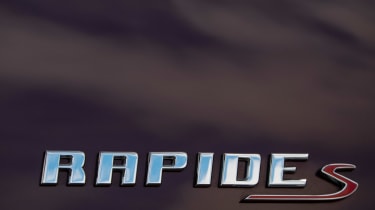 The Aston Martin Rapide S is a four-door sports saloon car that offers searing performance and a very high-quality interior. It competes with cars such as the Porsche Panamera and Maserati Quattroporte, but costs significantly more than both.

From the front, the Aston Martin Rapide looks like any two-door Aston coupe – the polished metal grille and long bonnet of the DB9 are both there – but look closer and you’ll see handles for the rear doors that sit flush with the bodywork.

The engine produces 552bhp and sends its power to the rear wheels through a smooth eight-speed automatic gearbox. Luxurious performance is a key Aston Martin selling point and this shows inside the Rapid. It may be starting to show its age, but no-one can argue with the quality of materials on show.

But the single biggest killer when running an Aston Rapide S is depreciation – you can expect your £150,000 Aston Martin to be worth just £70,000 after three years or 36,000 miles of ownership. You can also forget about cheap servicing or easy-to-manage service plans – Aston Martin maintenance is pricey and parts are expensive.

The Rapide S can get from 0-62mph in just 4.4 seconds and has a dizzying top speed of 203mph. The adjustable suspension allows you to switch between Normal, Sport and Track modes – the first is the most comfortable and the last two are stiffer for harder cornering. This means the Rapide S never feels as though it weighs almost two tonnes, while precise steering makes it easy to position on the road. The brakes are powerful, but not too sudden at town speeds.

The Rapide's four seats are supportive and exquisitely trimmed

For a sporty GT car, the Aston Martin Rapide is very comfortable. Its interior feels very expensive and there's lots of adjustment in the steering wheel and driver’s seat, making it simple to get sitting comfortably behind the wheel.

Adaptive suspension allows the Rapide to both drive like a sports car and offer the smooth ride of a luxury saloon. It deals well with most road surfaces and offers a compliant ride, despite there being almost no body lean in corners.

The Rapide is a very stylish way to transport four people

The Aston Martin Rapide S is one of the most stylish ways to transport four people on the planet. Space up front is excellent and the interior feels low down and sporty thanks to the car's high transmission tunnel.

The Rapide's rear doors swing up slightly as they open so as not to graze high kerbs. Think of the Rapide as a spacious coupe and you won't be disappointed – it's got more space in the back than a 2+2 GT car – but it doesn’t offer much more rear legroom than a supermini. That means it's tighter in the back than the Porsche Panamera and Maserati Quattroporte.

A 317-litre boot means the Rapide has more luggage storage space than a Ford Focus family hatchback. The rear seats also fold down for added practicality, boosting capacity to 886 litres.

No Aston Martin featured in the latest edition of our Driver Power owner satisfaction survey, so it's hard to tell how reliable the Rapide will be. Hand-built cars such as Aston Martins tend to suffer from more niggly faults than cars produced in robotised factories. However, playing in the Aston Martin Rapide’s favour is an engine that's been around for years and should have had any problems sorted now.

Euro NCAP hasn’t crash-tested the Aston Martin Rapide, so it's hard to say how it fares compared to its competitors in this respect. Nonetheless, it comes with eight airbags and a strong aluminium structure.

Packed with kit, but the Rapide is expensive compared to rivals

There are no clear rivals for the Aston Martin Rapide – a Porsche Panamera is cheaper, but it lacks the hand-built feel and top-notch materials you get in the Aston. Meanwhile, the Bentley Flying Spur more or less matches the Aston for price, but can’t compete with the Rapide’s looks and sports-car feel.

A car of this price should come with decent standard equipment and in the case of the Rapide S, that includes cruise control, electronic stability control, climate control, rear parking sensors, a Bluetooth phone connection and sat nav.

Aston Martin offers an almost unlimited degree of customisation on its models, as long as you're prepeared to pay for it. There's a huge range of wheel designs, paint colours and interior trims on offer to help make your Rapide unique. 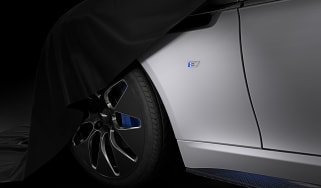 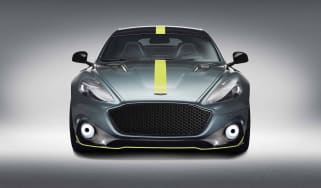 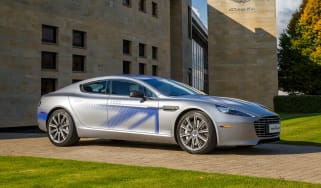