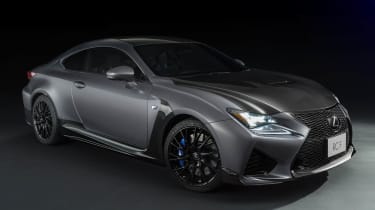 The Lexus RC F 10th Anniversary is mechanically identical to the standard car, so it's powered by a 457bhp 5.0-litre V8 petrol engine that gives the large coupe a 0-62mph time of 4.5 seconds and an electronically limited top speed of 168mph.

The biggest changes to this limited-edition Lexus are cosmetic. The 10th Anniversary gets special matte Mercury Grey paint, along with matte-coloured door handles, mirrors and side skirts. Polished black 19-inch forged alloy wheels sit in front of large Brembo brakes with blue calipers.

Blue continues as a theme inside, where swathes of blue leather and ‘Blue Carbon’ trim help set the limited-edition car apart. The back seats are trimmed in black leather. Every Lexus RC F 10th Anniversary also gets a metal plaque denoting its limited-edition build number, mounted on the driver’s side armrest.

On the outside, the 10th Anniversary gets the RC F Carbon Pack as standard; this adds a carbon-fibre bonnet, roof and active rear spoiler, along with a limited-slip differential, adaptive suspension and a driving mode selection system with Sport and Expert modes. The car also gets a comprehensive list of active safety equipment as part of the 'Lexus Safety System +' package, plus rear cross-traffic alerts and blind-spot monitoring.

The announcement of the RC F 10th Anniversary model’s arrival comes as the company celebrates the success of its Lexus RC F GT3 race car in the Blancpain GT series in Europe and IMSA sportscar racing series in America.