Ford has polished up its baby SUV – but does it sparkle? 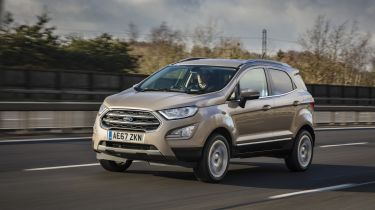 We can’t help thinking the EcoSport for sale at Ford dealers in the UK since 2014 could have been more of a hit. A brand with the weight of the Blue Oval launching into the ridiculously trendy crossover SUV class meant there was a chance to cause a real stir with imaginative design and clever marketing. Instead, Ford invited us all to get excited about a plain-Jane SUV developed on a shoestring primarily for South American and Asian markets, and which arrived in the UK with an unfamiliar ‘Made in India’ stamp.

The ploy might have worked, but it didn’t, and sales have been poor in Europe. Instead of giving up though, Ford invested further in the European version of the EcoSport. It moved production to Romania in 2017 and in 2018 introduced a facelifted model that looks at last like a member of the Ford Europe family.

The EcoSport Titanium is the sweet-spot of the updated range, packed with goodies and slotted into the line-up between the EcoSport Zetec and EcoSport ST-Line. Even the Zetec is well equipped, with 16-inch alloys, electric mirrors, manual air-conditioning, remote locking and Ford's SYNC 3 DAB radio with a 6.5-inch touchscreen. The Titanium ramps up the creature comforts further with 17-inch alloys, power-folding mirrors, keyless entry, silver roof rails, a bigger eight-inch touchscreen, automatic headlamps, climate control, cruise control, a reversing camera and part-leather trim. With so much included, it looks pretty good value, especially as it comes in just below the £20,000 mark.

In fact, the EcoSport now looks prettier full stop. The facelift concentrated on new nose and tail treatments, which means the car gets a Kuga-esque front end with more glamorous lighting and a wider, sportier grille, plus a more contemporary look at the rear. Whereas previously the EcoSport looked dowdy against rivals such as the Citroen C3 Aircross, Renault Captur and SEAT Arona, it now can hold its own. Unfortunately, the facelift hasn’t done anything to address the side-opening rear hatch, which probably works fine in the wide-open spaces of the Argentine Pampas, but is ridiculously awkward in a cramped supermarket car park – a shame, as the boot itself is reasonably sized.

The EcoSport is also cramped in the back seats for passengers, but at least the low-rent interior of the pre-facelift car has been dealt with and the new improved fascia shares a lot in common with the Fiesta.

Sadly, although it’s actually built on a Fiesta platform, the EcoSport isn’t anywhere near as pleasant to drive as its supermini stablemate. Jacking up the suspension has introduced too much body lean and ride quality on less-than-smooth British roads is less than satisfactory. The steering is light and direct, though, and at least you can choose the EcoBoost Titanium with a range of engines including the three-cylinder 1.0-litre EcoBoost in outputs of 99, 123 and 138bhp – of which we’d advise the middle one for its mix of economy and a 12.7-second 0-62mph time. It’s also the only engine with an automatic gearbox option. The diesel options are variations on a 1.5-litre EcoBlue, available with 99 or 123bhp. The latter gets four-wheel drive, which should add to the EcoSport’s appeal for rural owners.

The EcoBoost looks good on paper and better in the metal following its recent facelift, especially in lavishly equipped Titanium trim. However, the reality is less impressive, and the baby Ford SUV still lags behind rivals in too many areas.